The Raleigh Ringers' "RR" acronym doesn't just stand for the handbell ensemble's name; it also stands for Rock & Roll! Known for peppering their live performances with rock & roll hits, the Raleigh Ringers presented an entire spring concert of the genre, wrapped up in a collage-style livestream. The virtual event featured introductions and background from director David Harris, archival performances from past RR concerts, and conversations with RR members and arrangers.

The Eagles' "Hotel California," arranged by Marcia Murphy (a past Ringer), was a sonorous, slightly gentler version of the original, building up to an exciting iteration of the guitar solo. The intertwining rhythmic patterns in "More Than a Feeling" (as made popular by the band Boston) were artfully balanced against the vocal melody in the treble bells, bringing out the beauty of the melody through composer in residence Keith Burt's unique arrangement.

The concert presentation proved to be a sort of tour of the Raleigh Ringers' journey with rock & roll; Andrew Metz, the arranger of the RR's very first rock arrangement, introduced the archived performance of "Stairway to Heaven." He transcribed the ballad portion of Led Zeppelin's track from the cassette tape back in 1992, a successful beginning to the Raleigh Ringers' history of experimentation with handbell repertoire. Watching these past performances intertwined with the new not only showed technology's improvement, but also the Ringers' growth in number and musicality.

As Kansas super-fan and RR member Wayne Hicks explained, the symphonic texture of Kansas songs lends itself well to handbell arrangements. Keith Burt's "Dust in the Wind" arrangement was first created for a performance in Topeka, and it really brings out the minor-key pensiveness from the original. The Raleigh Ringers are not known for taking themselves too seriously, though – their performance of "Old Time Rock n Roll" featured a Risky Business send-up, complete with socks AND saxophone. And of course, a performance of "Don't Fear the Reaper" would be incomplete without more cowbell! Fun and entertaining staging, along with quality music, are just two of the many reasons why Raleigh Ringers fans are looking forward to seeing the ensemble perform live again.

A third reason would definitely be the experience of singing along! In "Livin' on a Prayer," (Jon Bon Jovi) the audience was heard lending their voices to the tune, even through the key change. The intricate ostinatos and the chiming treble melody together proved to be a great backdrop for the added vocals. An oft-requested classic, "Freebird" (Lynyrd Skynyrd) was the penultimate song of the concert, complete with stage security and the audiences' "lighters." Although the melody was mostly in the treble bells, the bass was very effective and groovy in this performance.

The final arrangement featured in this concert was first created in 2016, as part of the Raleigh Ringers' UK tour – "British Rock Tribute" honors the British rock greats with snippets from Queen, Led Zeppelin, Moody Blues, Pink Floyd, and The Who. This medley especially embodied Harris' leadership as he conducted the Ringers through the tempo, dynamic, and meter changes.

And if you want to hear more Raleigh Ringers before their next performance in the fall, the ensemble has produced seven CDs and two DVDs that are available for purchase on their website. 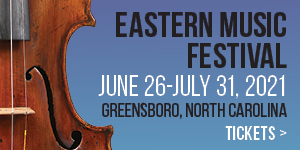