Whether or not history ultimately judges them premature, the reawakenings happening across America this past month – at sports and performing arts – are destined to be lasting memories for those of us who make it to the other side of this waning pandemic. More than Charlotte Symphony's return to Belk Theater five weeks ago, more than the five events my wife Sue and I attended at Spoleto Festival USA in Charleston earlier this month, the most recent Evenings at the Park concert at Symphony Park felt like a regathering and reaffirmation of our community. String players and the CSO president had worn masks on the Belk Theater stage, and the spacing of the musicians underscored how few there were behind guest soloist Branford Marsalis. At Spoleto, the absence of the usual opera, orchestral, and choral presentations left the indoor and outdoor stages in Charleston similarly depopulated. Onstage at Symphony Park for Father's Day weekend, the string players, associate conductor Christopher James Lees, and all the other players were unmasked, apparently spaced normally. Woodwinds, brass, and percussion were amply represented, so the selections from Gershwin's Porgy and Bess and Copland's Appalachian Spring Suite weren't drained of their customary colors. Wedged between them, David R. Gillingham's Appalachian Counterpoint rounded out a 50-minute program of music connected to the Carolinas.

Malleted percussion and a harp were in the forefront as the Porgy and Bess selections began in a mysterious mood, veering toward the romantic with the iconic "Bess, You Is My Woman Now" and – after an interjection from a 747 jet – taking a jaunty, brassy turn with "A Woman Is a Sometime Thing." Violins ushered in "Summertime" with a softly cradling sway, handing off to a forlorn oboe before "I Got Plenty of Nuttin'" entered brashly with the swagger of a trombone over a clarinet. After so many months of watching masked string players soldiering on, I felt gratified to be in a crowd listening to long-sidelined flutes, a muted trumpet, wood blocks, and a xylophone joining with their bowing comrades as the orchestra cruised through "There's A Boat Dat's Leavin' Soon for New York," "It Ain't Necessarily So," and "Oh Lawd, I'm on My Way" before circling back to the inevitable "Bess."

After all the heavy-lifting and going-it-alone that the string sections of CSO have done on local stages since last October, it was nice to hear Lees telling us that the strings would be sitting out the next piece while the winds, brass, and percussion carried on. A luxury well-earned! Originally written for a tuba-euphonium quartet last year, Gillingham based his Appalachian Counterpoint on an old folk lullaby, "All the Pretty Little Horses." As the absence of strings hints, Gillingham didn't keep the tune in that sleepy idiom in composing his contrapuntal contortions. This expanded version gave the different strands of the original quartet to different instruments, so it lost much of its original mellowness while ascending into the treble. Even in the slow middle section, sandwiched between the two speedier sections that were conspicuously cast in a mountain mode, Gillingham wasn't about lulling us. Since a brassy modernistic scattering was happening in this more diverse version than in the quartet original, it would have been useful for Lees to let us hear the traditional "All the Pretty Little Horses" melody briefly before performing Gillingham's Counterpoint. That way, those of us hearing the piece for the first time could track the theme more easily.

Darkness didn't envelop the park until after Appalachian Spring concluded, so those attending an outdoor CSO concert for the first time never did get to see the beauty of the vast stage canopy when it is lit up – in a succession of vivid colors – under the stars. Nonetheless, we could hear how ideally suited this vernal piece is for the outdoors in its quiet beginnings when the chirping of the birds and the chuffing of the cicadas mingled with the music, casting a twilight spell over the greensward and our assembly of picnickers. The cavalcade of beautifully-stitched-together ballet episodes ranged from hoedown to scenic grandeur and from slapstick to sanctity, giving various sections of the orchestra a workout while evoking the variety of moods and costumes that Martha Graham and her dance company envisioned in the 1944 choreography.

During the ebb and flow of energy and sublimity, Lees never allowed his ensemble – or his audience – to drift into doldrums, deftly insinuating the strains of the Shaker tune, "Simple Gifts," into the shifting panorama. At first, the tune danced tentatively. Soon it frolicked. While the stage never illuminated, it seemed to burst into bloom at that spectacular moment when, out of an expectant hush, Copland brings his recurring tune to full force and glory. It was only in the quiet aftermath that the riskiness of programming Appalachian Spring as an outdoor concert finale was cruelly exposed. However this performance may have ended, presumably with a poignantly fading flute solo peeping out in the gloaming, it was almost totally upstaged by the drone of a passing passenger jet overhead. While this wasn't a triumphant note to end on, few in the crowd left unsatisfied with the occasion – or unaware of its overall uplift. 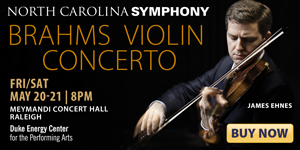