Composition as Explanation: "The Composition is Different, That is Certain" 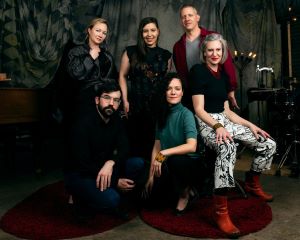 In the time of the composer, that is, the present, a composition must be contemporary – and because it is contemporary, it is naturally different than all that that has come before it, even if all things appear to look the same. And although the contemporaries in the time of the composition will reject the work, the composition, irritating and stimulating, is still beautiful. But when does a new work cease to be contemporary and become a classic? What happens to the beauty of a classic, that is, the beauty of a composition that is still of the time of its composition and in the time of the present where it is distributed and equilibrated, but is no longer contemporary? And how is contemporary art and contemporary war connected? These are the musing thoughts of Modernist writer Gertrude Stein in her poetic essay and lecture, Composition as Explanation. Co-commissioned by Duke University and the Arts Club of Chicago, composer David Lang launched the enormous task of setting Stein's writing to music for renowned sextet Eighth Blackbird. Titled after Stein's essay, Lang's Composition as Explanation was world premiered at the von der Heyden Studio Theater at Duke's Rubenstein Arts Center.

True to the avant-garde nature of the source material, Lang's Composition as Explanation is an expansion of Eighth Blackbird's unique style. Referred to as "Super Chamber Music," the unofficial genre falls between the cracks of instrumental music and theater that has become the guts and bones of the sextet's artistry. As I took in the set before the performance commenced, I began to understand just how lively and stimulating the evening's performance would be. With instruments staged across the space, a typewriter on a cluttered desk, a rectangular, illuminated entryway towards the back, and cobalt blue lighting permeating all of it, this performance was sure to be ground-breaking. But Super Chamber is more than just the set design; 8BB worked with director Anne Bogart for about a year to fully realize the project. As part of his commission, Lang wanted to create something that would transform 8BB as performers by demanding that they take acting lessons, study diction, and study the art of theater. Challenging conventions of chamber music and challenging the skills of the visionary 8BB ensemble, Lang stays true to his self-description as a "classic trouble-maker."

Composition as Explanation begins much more like musical theater than chamber music performance. Dressed like a vintage secretary, violinist Maiani da Silva entered first through the illuminated portal in the background. Instead of carrying her violin, she had in her hand a clipboard and pen. Enamored, as though she had made an exciting revelation, da Silva imparted the first lines of Stein's essay, "there is singularly nothing that makes a difference a difference in beginning and in the middle and in ending except that each generation has something different at which they are all looking." Confused and curious, I was thoroughly drawn in. As da Silva finished her delivery and continued to noisily scribble on her clipboard as she walked to her violin, percussionist Matthew Duvall took her place at the center. Duvall picked up the script where da Silva left off, creating a character all his own and continuing the narrative exploration of the past and present, all the while clinking a spoon against a ceramic mug. Each member of the ensemble made their entrance in this way, entering through the portal clad in a period costume and reciting Stein's words to the audience before making their way to their instruments. Starting with the noisy scribbling and clinking mug, musicians began picking up their instruments and turning the casual cacophony into something more recognizable. Prepared by a driving, unison rhythm in cello and piano and interplay between clarinet and violin, an aerial flute solo from Dalia Chin rang in the culmination of the movement.

Divided into eleven movements, each part of the work relates to a different passage from Gertrude's essay. Through music and acting, 8BB explored the daring, whimsical, complicated, and cyclical facets of Lang's interpretation of Stein. Watching each member of 8BB balance the music and text while maintaining the spirit of intent behind their actions was nothing short of spellbinding. The text, which was represented as monologue, conversation, and song, created a polyvocality among 8BB that added a certain naturalness and dynamism to the meaning. And Lang's music, sometimes technically simple and sometimes virtuosic, always communicated a complex, nuanced mood that was augmented by set design, staging, and the communicative power of 8BB. In the moderated Q&A afterwards with Lang, Bogart, and 8BB, it was shared that Lang's music is rather sad, and that Stein's work should be bubbly, but it's the interaction of those two personalities that awakens the complexity in both of their styles.

Lang's Composition as Explanation was no doubt contemporary. Contemporary because it is a product of its time, and because though the work was beautiful, it was also difficult, wild, and potentially unwieldy. However, as challenging as the work is, it breaks free of the classical sphere that is constantly replicating and repeating the classics. With so much freedom for interpretation and chance, every performance of the piece could be considered a premiere. The ensemble joked that each show the next two nights could be wildly different and that we should all buy our tickets in advance. Closely attuned to the needs of musicians and audiences today, David Lang, Anne Bogart, and Eighth Blackbird created a performance that was extraordinary, inventive, and deserving of constant reinvention.