Cellist Nate Leyland and the Fayetteville Symphony Orchestra wowed the audience at Fayetteville State University's Seabrook Auditorium as they played Dvořák's Cello Concerto Op. 104, B. 191 in B minor, with additional excerpts from Brahms, Smetana, and the British progressive rock group, Queen. The concert was excellently programmed, simultaneously entertaining the crowd and providing historical and cultural context for the Czech composer's emotional cello concerto.

Before any of the planned musical numbers, FSO music director and conductor, Stefan Sanders, announced that the Fayetteville Symphony Orchestra would play the Ukrainian national anthem, "to do our part to show support." The audience reverently rose to their feet as the orchestra offered this moving tribute to the Eastern European nation undergoing such hostile tribulations.

Sanders introduced the first programmed number, Brahms' Hungarian Dance No. 5, which served as a delightful precursor for the events to come. Sanders noted how "without Brahms, there would be no Dvořák." Brahms was greatly influenced by Eastern European Bohemian folk music, a genre close to Dvořák's heart and a major influence on his own compositions. The orchestra demonstrated their ability to play cohesively as a tightly knit unit – the flutes trilled and the timpani kept persistent rhythm. FSO brilliantly curated a festive atmosphere, which would permeate the rest of the evening.

The second piece, Dvořák's Slavonic Dance Op. 72, No. 2 in E minor, gave the audience a taste of the Czech composer's sensibilities. Sanders prefaced the number by calling it nostalgic and sorrowful, but nonetheless "dripping with beauty." A patron seated behind me commented on how well Sanders spoke, and it's true! Sanders has a unique, expressive ability when it comes to connecting with the audience – his showmanship translates especially well as the orchestra moved onto a more spectacular, interactive, and unorthodox symphonic number.

Yes, I mean Queen's legendary rock-anthem, known to all: "Bohemian Rhapsody." The song has more relevance than one would first think, given the importance of Bohemian folk music to the evening's program. And it was absolutely delightful! Sanders encouraged the audience to sing along, karaoke-style. He advised people to look up the lyrics on their phone on the off chance that they didn't already have them memorized – who doesn't by now? Normally subdued orchestra patrons aren't particularly used to busting out a Freddie Mercury falsetto in the middle of a concert, but the Fayetteville audience rose to the challenge. A little awkward, but a whole lot of fun, this unconventional piece ended with two rounds of riotous applause. Sanders jokingly stated that the audience could add "performed with Fayetteville Symphony Orchestra" to their resume – and I for one may just take him up on that. It's just one additional perk to attending such a wonderfully colorful community event.

The first half of the concert ended with a beautifully evocative and patriotic piece by Czech composer Bedřich Smetana. "Vlatava" (or "The Moldau," in its more commonly known German pronunciation) forms just one part of Smetana's tone poem Ma Vlast (My Fatherland). The orchestra brilliantly conveyed the movement of a river, descending from the high Czech mountaintops. Tone poems adapt non-musical objects into sounds, and the river flowed consistently and swiftly through the string sections – FSO wonderfully balanced each section to highlight the river's course, which at one point "flows" past a festive wedding party and ends in a patriotic hymn for the ages. The flutists received a special bow, and half the house gave a standing ovation as the orchestra left for intermission.

After intermission, the orchestra returned to play the night's signature number, Dvořák's Cello Concerto in B minor. Leyland was warmly welcomed onstage, flaunting a cello with flames painted on the back – fitting for the evening's selections.

The orchestra moved swiftly and emotionally through the first movement, and Leyland's technical abilities were greatly complimented by the ensemble – again, FSO's ability to balance and emphasize certain parts made this piece especially compelling and easy to follow. During the second movement, Adagio ma non troppo, the woodwinds and Leyland underwent a beautifully moving dialogue, delicate without losing any passion. The final movement highlighted the orchestra's ability to transition from this delicacy back into a forceful, triumphant finish, which closed the concert and received a standing ovation from the audience. Sanders gave special bows to the French horns and woodwinds, before he and Leyland took their own.

A night with the Fayetteville Symphony Orchestra is one to remember. The staff members at Seabrook Auditorium are kind and helpful, the music is enlightening, and the entertainment value is totally underpriced. Take advantage of this wonderful community resource, and don't miss their next concert because you will not regret it. 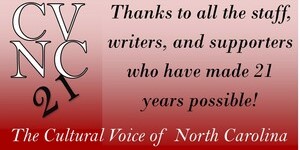