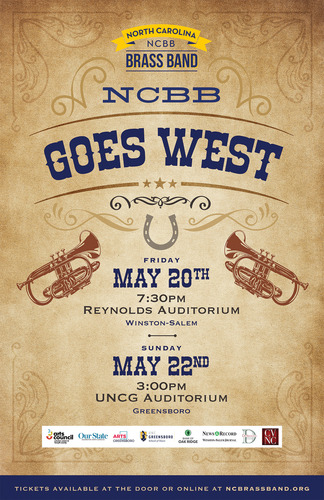 The North Carolina Brass Band, under the direction of Brian Meixner, will get you all set for summer with a concert celebrating the American Old West! The program will include treasured Western classics and music from some of the great Western films and TV shows. Lasso your friends and family together for a rollicking good time as the NCBB takes you on a journey to the Wild West!

Brian has held the position of Assistant Conductor of the River City Brass Band, where he played euphonium full time for six years.  Brian has been featured with the RCBB on several performances, both as a euphoniumist and conductor.  In addition to his duties with the RCBB, Brian played euphonium and trombone for several years with the River Bottom Quartet, a diverse low brass chamber group composed of River City Brass Band members.  Other chamber ensemble activity includes playing euphonium in Tubas In The Sun, a quartet of tuba and euphonium talent in central North Carolina.  Brian has previously served on the faculties of UNC-Greensboro, Slippery Rock University, the University of Texas at Arlington and Texas Woman’s University.  He also served as the Euphonium Teaching Fellow at the University of North Texas, where he completed a DMA in Euphonium Performance.