TheatreFEST is Back at NC State with Gripping Production of Assassins 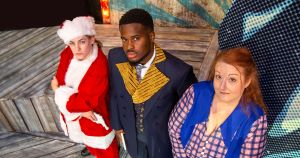 Celebrating its 30th anniversary, TheatreFEST is back after two years away! NCSU's University Theatre brings a dark, thought-provoking look at the somber theme of presidential assassinations in their production of Assassins, now performing at Titmus Theatre at Frank Thompson Hall on NC State's campus.

Based on an idea by Charles Gilbert, Jr., composer Stephen Sondheim and playwright John Weidman created a Tony Award-winning musical that tracks the motivations and the violent acts of nine infamous individuals who assassinated (or attempted to assassinate) the President of the United States. Directed by Danica Jenelle Jackson, the abject, vile stories of our country's notorious assassins were bared soberly by this local theatre, yet with alarming comedy. From John Wilkes Booth to Lee Harvey Oswald, with many in between, Assassins gives voice to the hopes, dreams, fears, and furies that emboldened each individual to pick up a gun and "squeeze [their] little finger." In no way does this production seek to celebrate the lives or excuse the decisions of America's four successful and five failed presidential assassins. Rather, Assassins throws these nine troubled individuals from different historical periods together on stage where they can provoke and inspire each other to irremediable acts, ultimately connecting to assassinate, motivated by a twisted American Dream.

On an impressive, elaborate, and beautifully constructed set designed by ​​Jayme Mellema that towers over sixteen feet tall, the story unfolds in a carnival setting, lit with an abundance of LED lights. The sentiment of "Step Right Up!" is projected on the screen across the Statue of Liberty, and the Proprietor (Natalia Soto) invites our country's assassins to pick up a gun, asking them to shoot a President and win a prize. The disturbing analogy of a carnival was not lost on me: the enticing shooting booth, the deceitful salesmen selling counterfeit items, the disappointing prizes you spend too much to "win," the eerie, old, abandoned carnival ambiance of fog and mirrors. There is a harrowing likening of assassination as a game, a game that John Wilkes Booth (Trevon Carr) started, or at least made known. A game where there is no real prize.

The musical begins with Booth's story, the one where he made his action into a cause, believing himself to be a modern-day Brutus by eliminating President Lincoln in hopes of reassembling the Confederacy. Carr emanated the pain of Booth, a man eager to put down his story and change the world. Sweating and crying as the growing, crackling fire engulfed the barn where Booth was hiding out, Carr's face clouded with desperation. And, after his death, he did not disappear. Instead, Booth haunted the stage in a creepy, evil fashion, offering the idea to "Kill the President!" as a solution to his anguished successors and urging them into action. It was a marvelous, though thoroughly unsettling, performance by Carr.

All the actors captured the tortured souls of their assassins, convincingly conveying their lies and questions about truth. This had an impact of making me sympathetic to their pains and frustrations while also heartbroken over their collective resort to view assassinating the President as their only solution. Jackson's performance was convincing, showing the unrestrained ambition of Guiteau and his persistent belief to be doing the Lord's work. Bramford was stunning in her role, exhibiting Czolgosz's anger over a corrupt government and boasting a beautiful voice and large stage presence. Dixon made Zangara into a tremendous character. As Zangara opted to kill FDR to relieve his stomach pain, Dixon looked as if he was in true agony. He prioritized Zangara's anger and spoke wonderful Italian at the end of the musical. Wingfield and Shank had a lovely rapport throughout the production. Shank embodied the colorful housewife who can't aim a gun and Wingfield emanated love for boyfriend Charlie Manson, hoping to prove her love to him. Likewise, singing a ballad with Wingfield, Inhulsen displayed his determination to prove his love to Jodie Foster by assassinating President Reagan.

With so much to follow in Assassins and so much heavy content, two characters captured the brunt of the play in their lyrics: Samuel Byck and Lee Harvey Oswald. Fralix gave an astounding performance of Byck's two monologues, asking all of the questions that were racing through my brain. On his way to hijack a commercial jetliner and crash-dive into the White House to assassinate President Nixon, Byck compared the American people to children waking in the dark, asking: Where are we? Who is telling the truth? Who do we believe? Who do we trust? What do we do? All these questions – and then some – have circled through my mind today. However, diverging from this musical's characters, my answer would never be assassination of the President. The biggest questions still remain: Why resort to killing the President? What is the prize? Fame? Fury? Revenge?

After narrating the stories of the other eight assassins with Sondheim's playful lyrics, Karter Jet Dolan transitioned from Balladeer to Lee Harvey Oswald. As Oswald prepares to kill himself on the sixth floor of the Texas School Book Depository to relieve himself of his struggles, Booth appears and suggests killing President Kennedy instead. He summons Guiteau, Czolgosz, Zangara, Fromme, Moore, Byck, and Hinckley forward and muses that Oswald can join them, connect with them, and finally be part of something. His act can unite them together, it can make a change.

On the subject of songs and music, led by musical director Diane C. Petteway, the orchestra performed the score with grace, highlighting its intricacies and blending it seamlessly with the actions and words on stage. With lighting and sound design by Patrick Mathis and technical direction by David Jensen, the stage was framed to illuminate the mature and thoughtful professionalism of the cast and production team. Such thoughtfulness was translated into Laura J. Parker's costume design as well, representing diverse decades throughout the United States' history.

Assassins recounts some of the darkest days in our country's history and considers the cyclical nature of gun violence in America. As Mia Self, Assistant Director of Performance & Academics at University Theatre, asserted when introducing the show, this production is an "invitation to conversation." Assassins is a look into our past, but as I left the theater, I found myself relating its considerations, particularly those on mental illness and the media, to the present day. This was an unsettling production, and with gun violence continuing in the United States at a noxious level, most recently with the Robb Elementary School shooting in Uvalde, TX, Assassins pulled at my heartstrings. Assassins is a gripping example of how art can be an effective tool to engage with our history. It is comforting to witness local encouragement of sincere, considerate conversations about our past and our present, even if these conversations are difficult and frightening.

Note: All guns in this production are two-dimensional representations and gunshots are simulated by balloon pops.

Assassins continues through Sunday, June 19. For more details on this production, please view the sidebar. You can view the digital playbill here.

TheatreFEST also offers a variety of theatrical experiences revolving around the production of Assassins. To learn more about these unique opportunities, including pre- and post-show discussions; a workshop presentation of Away Home, a new musical commissioned by Honest Pint Theatre Company; and a 10-minute-play festival, visit the TheatreFEST home page here.