Sister Act at Matthews Playhouse Is a Joyful Triumph 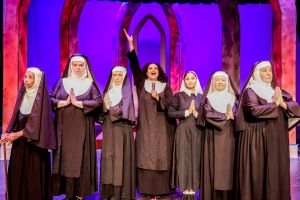 When I arrived at The Fullwood Theatre at Matthews Playhouse for Friday night's performance of Sister Act, I was amazed at the droves of people filling the humble space for an opening night performance. There was a buzz that is often found in community theatre performances, laughter and excitement with the distinct warmth of local support. As audience members made their way to their seats, they were greeted by a nun named Sister Mary Matthews, who was surrounded by a photo op display. People gleefully stopped to chat and take a picture before the show. It was in this way that the tone of the performance was beginning to emerge: fun, colorful, and oh-so-vibrant.

I can't say I blame the audience for their joyousness. During her curtain speech, Executive Director Sarah Baumgardner expressed her content at seeing a full house as the company performed their first full-length musical since the pandemic. This audience was excited to see their local theatre get back to what they do best, and it was infectious. Soon, the stage filled with light for the opening number, "Take Me to Heaven." Immediately, the sound of soul filled the room. Once it was there, it never left.

This particular show is in dangerous musical territory. First, there's the reputation of the iconic 1992 film starring Whoopi Goldberg. Also, there’s the reputation of the five-time Tony Award-nominated stage production (produced by Goldberg and staring Patina Miller). To top it off, even if an audience member has never seen either, the music itself (written by Alan Menken) provides its own difficulties. Actors can sing all the notes correctly, but without filling the notes with soul, the performance will fall flat. That's a lot of pressure to put on a community production, and yet, I am amazed to say Matthews Playhouse’s production absolutely succeeded in making this production their very own.

Iris DeWitt's star shone brightly as Deloris Van Cartier. She was a vivid female lead, infusing the show with comedy, sass, and lots of sequins. Don't let her beginnings in a seedy nightclub fool you. DeWitt's Van Cartier was energetic yet earnest, and stole the audience’s heart by the end of the show. She was joined in humor and spirit by a stunning cast of actors who also made the most of their roles, becoming an unforgettable force. Griffin Digsby plays Eddie, comically dubbed "Sweaty Eddie," who begins the story as a fearful, anxious police officer with a huge crush on Deloris. While his awkward idiosyncrasies may delight, Digsby charmed the crowd with his rendition of "I Could Be That Guy." His smooth and flexible vocal quality made this number one of the best in the show. A notable feat, considering he was sharing the stage with an ensemble of sequined singing nuns. Another performance to note was that of Melissa Lozada as Sister Mary Robert. Lozada captured her character’s demure nature and let it unravel, leading to a riveting change performed with fierce honesty. It wasn't just her acting either, Lozada's crisp and clear tone stood out amongst her sultry-voiced counterparts and held its own against them well. Full cast bios can be found HERE.

Of course, this show is known not only for its music but also for its comedy. Carol Weiner as Mother Superior had impeccable comedic timing with her dry, religious remarks, as did the trio of gang members that follow the show's protagonist. TJ (Jamaas Britton), Joey (Ra'Saun Elliott), and Pablo (Neifert Enrique) were hilariously irreverent while singing the disarming "Lady in the Long Black Dress." However, I must acknowledge that Sister Act's comedy includes some humor that hasn't aged well in recent years. These moments are sparse, but hopefully the writers of Sister Act will reconsider some of the jokes that land more harshly now than when the musical was originally conceived so that they don’t take away from the otherwise lighthearted atmosphere of the show. On that note, I would have appreciated a warning that gunshots are present in the show. Unfortunately, we live in a world where gun-related tragedies are quite frequent and on everyone’s mind. While some shots in the show are expected, others are not, and are quite realistic and jarring.

The show's lighting design provided wonderful vibrancy to match the musical's retro feel. Contrastingly, the set was mostly functional and didn't seem to rise to the rest of the production's level of flair. However, the production did succeed in capturing the fashion of the 70s with glittery costumes that catch the eye. They set the stage for "fabulousness," even providing some humor when combined with the traditional nun's habit.

Matthews Playhouse deserved great credit for their joyful and triumphant return to normalcy. Sister Act has not one but many stunning individual performances, a fantastic ensemble, and family-friendly comedy that is sure to delight. Let yourself be submerged in sparkle and sweet music. Head over to Matthews and check out this electric show!

Sister Act continues through Sunday, July 24. For more details on this production, please view the sidebar.