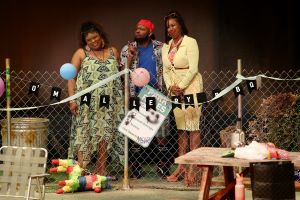 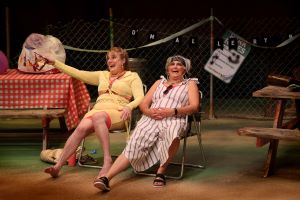 There are plenty of questions to ask in Robert O’Hara’s Barbecue as two O’Mallery families – one White and one Black – gather at the same park, both of them staging fake outdoor parties for the same kindly but devious purpose. These questions explode upon us as soon as the White O’Mallerys are replaced by the Black O’Mallerys after the first blackout, wearing the same exact outfits we have just seen moments earlier, drinking the same beverages, and popping the same pills. Even their names are the same. Both Lillie Anns are prodding their reluctant kinfolk – husband James T. and sisters Adlean and Marie – to drape the same pavilion at the park in party decorations, to feign a joyous family celebration, and to confront family renegade Barbara and get her into a therapy program that Lillie Ann has specially chosen for her in faraway Alaska.

Mercifully, we gather that both of O’Hara’s O’Mallery families are on the same track because their scenes deftly overlap rather than tediously repeating. The checkerboard structure of the playwright’s comedy was a perfect vehicle for the new hybrid company that was presenting it at Barber Theatre on the Davidson College campus. Common Thread Theatre Collective is a joint venture between North Carolina A&T State University theatre faculty members and Davidson’s Department of Theatre. Established 131 years ago in Greensboro, A&T is the nation’s largest historically Black university, with a student body that is 82% Black or African American (according the Integrated Postsecondary Education Data System Fall Enrollment data). Domestic students of color, as reported on Davidson’s website, are currently at 28% of the matriculated population – and an influx of 8% international students enhances the college’s diversity.

Predictably enough, the two O’Mallery families appear to be blissfully unaware of one another – until intermission. Directing the show, Donna Baldwin-Bradby encourages skin color to make a difference in how James T.’s Pabst-Blue-Ribbon trashiness, Adlean’s chain-smoking vulgarity, and Marie’s besotted Jack Daniel’s elegance play out on stage. Maybe I’m biased, but the trashiness, vulgarity, and besottedness of the White folk seemed more outsized to me than their counterparts’, which chimed well with O’Hara’s overall design. The two Lillie Anns were woefully lacking in vices as they masterminded their schemes and manipulated their interventions, but both were more controlling than they strictly needed to be, relishing their dominion. Here again, Joanna Gerdy gets to be just a little bit bossier, trashier, and more crotchety than Willa Bost, her Black clone, even though she was basing her master scheme on some cliched TV series.

We began to understand what was going on with the abrupt break in the action that brought us to intermission. If that sudden jolt hadn’t made it all obvious, O’Hara double underlined his answer in a manner almost as surprising as his intermission reveal. For the first time, a Black person and a White person spoke to one another – and it was the two Barbaras, Ava McAllister Smith and Jade Parker, who clarified the mysteries we had seen, two characters who had hardly spoken 10 words between them until now. Suddenly, what seemed to be a satirical dive into the crassness of American life, with subtle distinctions between the races, acquired new meta textures as the two Barbaras met at the park and negotiated. How this story should be told, who should tell it, and how much it should cost were all up for grabs as the Barbaras jousted over making a deal and setting a price.

Taking it all in, from the unseen moment when Lillie Ann was inspired by primetime TV to hatch her scheme, moving along to how one Barbara reshaped her rehab memoir before her counterpart Movie Star Barbara bought the rights, I came away with the following message from O’Hara: fueled by drugs, alcohol, and toxic righteousness, truth is what gets most thoroughly slaughtered and barbecued in American life. On the way home, another pleasant thought hit me. Thanks to an artful gap between scenes in Act II, rehab Barbara may have actually lowballed the amount of money she was promised earlier from Movie Barbara when she confronted the other O’ Mallerys with Hollywood’s offer.

The presence of two Actors Equity performers, more than we see in most touring shows nowadays, testified to the professional-grade theatre that Common Thread has delivered, for neither of them stuck out uncomfortably among their local and intern castmates. Parker and Smith were nicely matched in the comedy’s one interracial faceoff, taking turns in holding the upper hand and smoldering nicely when they didn’t. As the only men we see before intermission, Shawn Halliday and Tyler Madden get to pop and stomp plenty of beer cans as the J.T.s, taking heavy fire from the Lillie Anns all the while, but Halliday is the seedier of the two, while Madden has the edge in timidity. La’Tonya R. Wiley was a formidable presence as Adlean no matter how many cigs she fired up or how many pills she gulped down, while Lane Morris made her Adlean more strung-out than anybody.

Gregory J. Horton has designed a set of costumes that likely inspired Baldwin-Bradby and her cast nearly as much as O’Hara’s canny script. At the opposite end of the spectrum from JT’s splashy mashup of baseball, soccer, and tennis outfits is the eye-popping elegance of the lemon dresses worn by our Maries. These citrus dresses are accessorized with high heels that are just as inappropriate for an outdoor barbecue, along with jugs of Jack Daniel’s large enough to sport handles for easy chugging and pouring. Of the two Maries, it was hard to say whether I most enjoyed the arc of Shawna Pledger taking Marie from swilling to passing out, or whether Xulee-Vanecia J subsequently surpassed her in Marie’s decorous revival.

Questions about Barbecue continued to assail me on the drive home. Foremost among these was how anyone could imagine a homespun, humdrum story like this winning an award. Sure enough, O’Hara had embedded an answer. You can bet it had nothing to do with honesty and everything to do with America.

Barbecue continues through Sunday, July 31. For more details on this production, please view the sidebar.