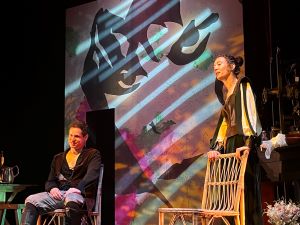 Last April, when theatre was just beginning to emerge from its pandemic hibernation, would have the perfect moment for Charlotte Conservatory Theatre to spring to life with its first production, Jen Silverman’s Witch, now at Booth Playhouse. The 2018 tragicomedy was based on The Witch of Edmonton, a lurid Jacobean script written by William Rowley, Thomas Dekker, and John Ford. All of that original play – all five acts, mostly in iambic pentameter – was written and readied for performance within the space of four months. That’s how long it had been since the true-life “witch” the play was based upon, Elizabeth Sawyer, was hanged for witchcraft on April 19, 1621. A year and four months after the quadricentennial of that execution, when our fears have shifted from death by COVID to inflation and monkeypox, the sardonic tear-it-all-down thrust of Silverman’s play may have blunted a little, but its fierce feminism remains intact.

Make no mistake, most of the gripping power of this evening at the Booth emanated from the white-hot Charlotte debut of Audrey Deitz as the lonely, defiant, and principled Elizabeth. But then there’s also the Charlotte debut of Stephen Kaliski as Scratch to bring out all of Deitz’s bewitching charisma, for his portrayal of the Devil had plenty of charisma to vie with Elizabeth’s. Kaliski was guileful, quick-witted, disarmingly frank, and surprisingly vulnerable on opening night. Here the Devil had met his match and more.

Such stunning simultaneous debuts of two experienced out-of-town actors with a local theatre company at Booth Playhouse are phenomena we haven’t enjoyed since the demise of Charlotte Repertory Theatre in early 2005. The regional professional aroma of that long-gone LORT company was sustained by the polish of the design team, led by scenic designer Tom Burch, whose previous local gigs I’ve praised at UNC Charlotte and Children’s Theatre. With their brushwork, scenic artist Lane Morris and portrait artist Eva Crawford clash a bit with Burch’s 17th century furnishings, echoing how Silverman pulls against the bygone era with her idiomatic dialogue. But Kellee Stall’s costume designs settle the matter, sort of. “Then-ish. But equally of our moment,” is Silverman’s dictate on the era of her work.

We see the “Then” most vividly in Stall’s costumes when we shuttle to Silverman’s other plotline at Sir Arthur Banks’s castle, which occupies most of the stage. After Elizabeth’s opening burn-it-all-down aria, delivered under a sharply brilliant spotlight, the other actors parade on stage, following the lead of Cuddy Banks, Sir Arthur’s foppish/effeminate son, who may be Morris-dancing around Dad’s imposing dinner table. Anyway, he will soon tell Scratch that he performs in a Morris-dancing troupe. What Silverman and Elizabeth seem to enjoy most about Scratch is that he’s selective.

So what Cuddy likes about Scratch, when he comes offering temptations in exchange for his soul, is that he’s coming to him before approaching either Elizabeth or the up-and-coming Frank Thorney. You see, Dad has taken Frank into his household and is now thinking about adopting the upstart, because Frank is clearly more likely to produce an heir. Rob Lutfy, who has been off our radar as a director for over a decade, has made an interesting alteration in how he sees Cuddy, pointing up his sexuality and discarding his shyness, handing a plum comical role to Jeremy DeCarlos, who feasted on it. What was easy to forget on opening night, amid DeCarlos’s prancing and his Percy Blakeney fopperies, was that Cuddy first considered asking for Winnifred, Dad’s servant, in exchange for his soul. Scratch short-circuits that request by pointing out that Winnifred is secretly married to Frank – a revelation that is doubly devastating to Cuddy. Even as he switches the bargain, exchanging his soul for Frank’s life, he is wildly in love with his manly, dashing nemesis.

If you’re scratching your head a little over Scratch’s objection to Winnifred, you will learn more intriguing details about Silverman’s concept of the tempter. He is not all to be confused with Satan or Lucifer – or with their supernatural omniscience. Instead, he’s like a traveling salesman, assigned to a specific territory, not exactly a rookie but lacking in past prestigious catches to boast of. Watching Witch at the Booth, I had the feeling that, after bagging Cuddy, Scratch moved on to Elizabeth and Frank because his bargaining with Cuddy yielded those leads. Dominic Weaver played the confident and ambitious Frank with a hulking, self-assured swagger that contrasted perfectly with DeCarlos’ spindly fidgeting.

When Frank sets his price at becoming Sir Arthur’s heir, in exchange for his soul, Scratch’s answer is exactly the same as when Cuddy asked him to kill Frank: “I think we can make that work.” You might wonder how Satan’s Edmonton rep accommodates both rivals. Without explicitly answering, I’ll surmise that Silverman may have read Macbeth as profitably as she read The Witch of Edmonton. Fulfilling the Devil’s work delivers some complications, of course, not the least of them are Winnifred’s flare-ups when she hears that her husband is yielding to Sir Arthur’s efforts to fix Frank up with a nobly born wife.

It’s not just Elizabeth and Cuddy, then, who get their opportunities to sing their woes. From her multiple cares and troubles, Savannah Deal as Winnifred gets to deliver a fine aria – Silverman’s term for all the soliloquies she doles out to her players – touching us as she transcends her worldly status of peasant wench. Ron McClelland certainly gets multiple chances to humanize Sir Arthur, pouring his heart out to his deceased wife (the woman in the portrait) and agonizing over the future of his family name.

Your only worry, as Silverman’s separate plotlines develop, is whether she will ever tie them together. It’s not a terrible concern, for Elizabeth’s destiny becomes as fascinating as the love triangle at the castle once Scratch becomes as besotted with Elizabeth as we are. Silverman offers the choice of casting the outcast witch as a woman from her 40s to her 60s, but after seeing the vibrancy of Deitz in the title role, I believed Lutfy made the ideal choice in going for the low end of that scale. Aside from one single bobbled line, the opening night performance was seamless, magical perfection. What an auspicious beginning for Charlotte Conservatory Theatre! May their future runs be longer than four days.

Witch continues through Sunday, August 14. For more details on this production, please view the sidebar. To learn more about the artists involved in Witch, click HERE to view the show's digital playbill.