NCCMI's 'Music by Black Composers' is a MLK Day Treasure 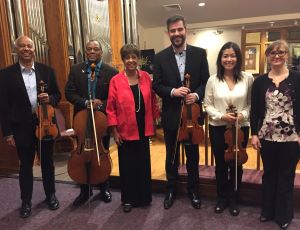 The second of the NC Chamber Music Institute's Impact Series concerts this season marked the fourth Martin Luther King Jr. Day tribute concert by the organization. (While one of the four offerings of this now-annual program was a repeat of the previous year due to the COVID-19 shutdown, it has been growing in scope and popularity ever since!) NCCMI and the United Strings of Color, both very young organizations (established in 2014 and 2018, respectively), are already doing amazing work in music mentorship, community engagement, and addressing the racial disparities long present in classical music.

Dr. Timothy Holley curated a moving collection of chamber works by Black composers that was widely varied but unified in its emotional depth. The United Strings of Color opened the concert with William Grant Still's "Summerland." Felicia Adizue, violin, led this ensemble with gorgeous tenderness, achieving both sumptuous swells and a masterful diminuendo down to nothing at the end of this evocative work.

Varying combinations of NCCMI faculty members performed the majority of the program, with a string quartet made up of Alice Ju and Greg Logan, violins; Jacobus Hermsen, viola; Dr. Holley, cello; as well as Waltye Rasulala, soprano; and Olga Kleiankina, piano. The students of the WCPE String Quartet (Alexander McDowell and Katarina Dobrosky, violins; Aidan Collins, viola; and Andrew Chung, cello) bookended the concert with high levels of professionalism and finesse, notably in their performance of Carlos Simon's "Elegy: A Cry from the Grave." Their complex, independent lines were rich, and the communication between players was incredibly clear through their breathing and eye contact with each other.

While some of the composers featured on the concert are recently popular classics like Florence Price, William Grant Still, and Samuel Coleridge-Taylor, more were contemporary or still living (and one is even an NC native). Dorothy Rudd Moore's (1940-2022) Modes for String Quartet was a highlight: this particularly interesting, three-movement amalgam is the result of her studies with three unique composition teachers. The teachings of Mark Fax, Nadia Boulanger, and Chou-wen Chung, plus Moore's founding of the Society of Black Composers, all influenced her as a composer, and the effects can be heard in the layered and complex textures of Modes. The faculty string quartet's performance was rich and beautiful in both its contrapuntal and its extended dissonant moments.

Rasulala gave lovely vocal performances, accompanied by Kleiankina, towards the middle of the program. She sang in a beautiful lyric soprano that conveyed lovely yet haunting lullabies. "Little Black Slave Child" from William Grant Still's Troubled Island (libretto by Langston Hughes) premiered in 1949, the first premiere production of an operatic work by an African-American composer by a major American opera company. Meanwhile, "Dormi, Jesu" was a setting by Charlotte native Jacqueline B. Hairston of a Chilean lullaby, purportedly sung by indigenous Araucanian mothers. Both were beautiful, sorrowful, and yet sweet.

Kleiankina's solo performance of Price's "Clouds," as well as her collaboration with Hermsen on L'extase de l'amour by Leslie Adams, were gorgeously sweeping, each flouting the lines between sensitive and richly emotive. Hermsen delivered jaunty and syncopated rhythm over Kleiankina's shimmering ripples of movement, giving credence to the lyric originally found in Adams' work: "all boundaries are but an illusion." This was a poignant message that rang throughout the whole evening.

The entire company returned at the end of the program to play "Lift Ev'ry Voice and Sing" by James Weldon Johnson and John Rosamond Johnson, and the audience (wholeheartedly!) sang along under Rasulala's guidance.

NCCMI founders Elizabeth Beilman and Jimmy Gilmore were ever-present hosts, mentors, and facilitators – busily helping direct performers and intern stagehands through stage resets between every set – but the event's overall success came from the investment and representation of Black musicians, composers, and supporters. Dr. Holley created a program that honored the legacy of Martin Luther King, Jr. and the Civil Rights Movement through old and new works that were reverent, sorrowful, hopeful, and joyous, and the performances by up-and-coming and professional musicians of color were dazzling.

The performance will be reprised in a livestream on January 26 at 5:00pm on the NCCMI YouTube Channel, while the next chamber concert takes place on February 12 – both will be absolutely worth your time!