Marc-André Hamelin Returns, Triumphant, to Duke - This Guy Can Play Anything! 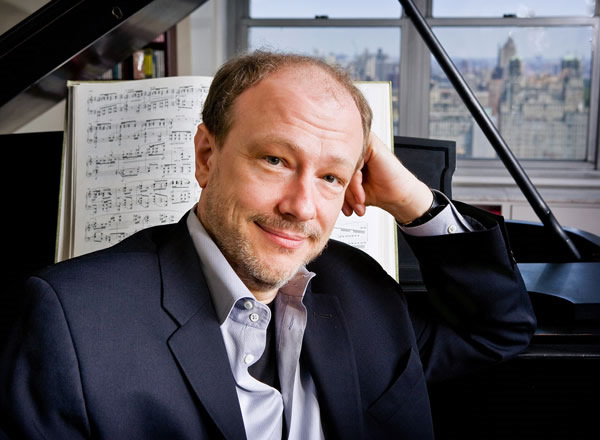 It's been five years since his last appearance  for Duke Performances, but pianist Marc-André Hamelin has not been avoiding the Tar Heel State – he played for the Secrest Series in October 2006, for the Raleigh Chamber Music Guild in May 2007, with the Takács String Quartet, also for Secrest, in April 2009, and at UNCG last fall. (Coincidentally, the Takács returns to Duke on March 12 – for details, see our calendar.)

Hamelin made his name – and most likely a small fortune, too – championing music no one else played – music few people had ever heard or heard of, for that matter. In recent years he's expanded his repertoire to gargantuan proportions by taking up more mainstream works, all the while enriching his programs with – often – far more generous helpings of whatever is at hand (like, for example, the whole second book of Debussy Préludes) than his contemporaries tend to offer in their recitals. And of course he still gives more than sufficient quantities of rare and unusual pieces – by folks like, for example, Pancho Haralanov Vladigerov, one of whose sonatas he played during his previous DP program, or Charles-Valentin (Morhange) Alkan (1813-88), whose "Symphony for Piano Solo" formed the capstone for this Reynolds Industries Theatre recital.

We tend to think of artistic golden ages as bygone epochs during which musical gods walked the earth – the "Golden Age of Wagner" was the Flagstad-Melchior period at the Met, for example (till Birgit Nilsson appeared on the scene) – but it may be that we will eventually look back at the here and now as a golden age for pianism, as Duke's outstanding Piano Recital Series has been hammering home (figuratively, of course…) in recent seasons. (The series has also helped remind folks that solo recitals are not on any endangered lists, at least 'round here.)

For his latest program here, Hamelin offered both Haydn and Mozart in the opening round. Now there's a neat trick, for sure. It's a fact that both composers offer incredible challenges. And it's a fact that few artists can do equal justice to both. (Think of all the conductors who did only one or the other well….) On this occasion, Haydn's Variations in E minor were impressive on all counts – overall precision, clarity, balance of internal voices, phrasing, articulation, command of the set's architecture, and more emotion than one might ever have expected; Mozart's Sonata in A minor, K.310, encompassed all those qualities while emerging perhaps even more of a revelation because the composition of the sonata predated that of the variations.

A bit of Liszt – one might wonder at some of the programmatic juxtapositions Hamelin comes up with – brought the generous first half to a dizzyingly dazzling close: the Venezia e Napoli triptych doesn't sound consistently Lisztian, to be sure, but its second section, for sure, stood up well against the introspection of the opening pieces and the pensive tranquility of Fauré's Sixth Nocturne, which followed the intermission. That little French gem would have been worth the price of admission all by its lonesome self, but that fact need not have been as surprising as it was for some, for Hamelin is of course French Canadian and thus he comes by his affinity for this music honestly.

The grand finale – very grand indeed – was the Alkan Symphony. What, a symphony for piano? Yes, and it's but a tantalizing third of a larger collection (another part of which forms a Concerto for Piano Solo). The collection is the Op. 39 Études ("in All the Minor Keys"), and the Symphony consists of numbers 4-7 thereof. The composer was a bit of a nut, albeit a brilliant one – had he lived a little longer, he might have been a great pal of Oscar Levant, although a stronger composer parallel would have been George Antheil. That Alkan wrote these pieces for himself is de facto proof of his prodigious technical ability. That Hamlin can play them comes as no surprise, but his interpretation of the challenging music – his ability to get intellectually inside the music – was something of a revelation as the 26-minute score unfolded. One pondered merely sitting in stunned silence or jumping up to cheer – the latter option took hold in the hall as Hamelin was repeatedly recalled till at last he played a left-hand étude of his own (based, he told us, on a Tchaikovsky song) and then, to cause the insistent crowd to disperse, a short snatch of Haydn, bringing the evening back to the point where we'd all come in.

DP's Piano Recital Series concludes with Marino Formenti on March 27. Be there!