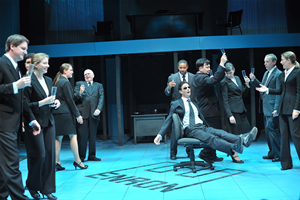 Though not strictly a musical, Enron uses a great deal of music, dance, movement, puppets and video elements to tell the story of one of the most heinous crimes of the 20th century, the Enron Corporation’s decline from the very top of American business to a collapse of unprecedented proportions. Ken Lay, Jeffrey Skilling, Andy Fastow, the Arthur Andersen accounting firm … they are all there in Prebble’s blistering comedy/tragedy. The play focuses on Skilling’s meteoric rise from obscurity to the position of President of one of the world’s most powerful energy companies. Skilling was brilliant, but flawed, and he allowed himself to be drawn into a morass of unethical and illegal activities until the vast Enron empire crashed around him.

Originally presented at the Chichester Festival, Enron moved to the Royal Court Theatre in London in 2009. It subsequently transferred to London’s West End in early 2010. It transferred to Broadway shortly thereafter. It has been touring England since then in a production co-produced by Headlong, the Royal Court and the Chichester Festival. When it opened in London, the Telegraph’s Dominic Cavendish called it an “era-defining, must see theatrical event." Michael Billington, writing in the Guardian, called it “an exhilarating mix of political satire, modern morality and multimedia spectacle.”

Enron is Lucy Prebble’s second play. Her first, The Sugar Syndrome, premiered at the Royal Court Theatre in London in 2003 and won her the prestigious George Devine Award for Outstanding New Playwright. Originally from Surrey, she attended the University of Sheffield. She is currently on commission with the Royal National Theatre and the Royal Court.

Jerome Davis, Burning Coal Theatre Company’s founding artistic director, will stage Enron for Burning Coal. Originally from Tennessee, Davis spent a dozen years living in and working out of New York City as a professional actor and director before moving to Raleigh in 1996 to open Burning Coal with his wife, Simmie Kastner. For Burning Coal, he has staged David Edgar’s East European trilogy, Pentecost, The Prisoner’s Dilemma, The Shape of the Table (the latter two American premieres), the world premiere of Ian Finley’s 1960, Ron Hutchinson’s Rat in the Skull, Alex Finlayson’s Winding the Ball, Tom Stoppard’s Night and Day, and others. He recently directed The Turn of the Screw by Benjamin Britten and Myfanwy Piper for NC Opera.  Nationally, he has worked at Trinity Repertory Company in Providence, the New Jersey Shakespeare Festival, People’s Light & Theatre Company near Philadelphia, Wellfleet Harbor Actors’ Theatre in Massachusetts and the Phoenix Theatre at SUNY/Purchase. He has worked or studied with David Edgar, Ellen Burstyn, Richard Jenkins, Adrian Hall, Nikos Psyacharapolous, Amanda Peet, Uta Hagen, Julie Bovasso and Ralph Waite.

Robin Harris is Director of the NC State University Dance Program, holds a BA in French and an MA in Dance from The Ohio State University, and has received certification from the Dance Notation Bureau as a Labanotation teacher. A choreographer of over twenty-five major works, Robin is a recipient of two NC Arts Council Choreographers Fellowships, a recipient of the Raleigh Medal of Arts and, and an Indy Award. Robin has been recognized for her choreographic work by the North Carolina Arts Council, the City of Raleigh Arts Commission, the American Dance Festival, and by the American College Dance Festival Association on both regional and national levels. Her work has been presented five times in National Galas of the American College Dance Festival Association, including performances at the John F. Kennedy Center for the Performing Arts. Additionally, Robin has served as a guest artist at Washington and Lee University, James Madison University, University of Maryland – College Park, and Hollins University. Full evenings of her work have been presented by NCSU Center Stage and the Southeast Women’s Studies Conference. Robin’s work toured four seasons with the North Carolina Dance Festival. In 2002, National Public Radio’s Studio 360 aired a piece about Robin’s choreographic work, 30 and 73.

About the Cast and Crew

Ken Lay will be played by Chapel Hill actor Mark Filiaci. Mark has appeared with Burning Coal on a number of occasions, most recently in Shakespeare’s Much Ado About Nothing. Jeffrey Skilling will be played by New York City-based actor Nick Berg Barnes, who played Petruchio for Burning Coal in The Taming of the Shrew. The role of Andy Fastow will be played by Durham actor John Allore. John most recently appeared with Burning Coal in the American premiere of David Edgar’s The Shape of the Table. Raleigh’s Jenn Suchanec will play the fictional “Claudia Roe.” Jenn most recently appeared with Burning Coal in Much Ado About Nothing. The cast also includes Durham’s Jade Arnold, Chapel Hill’s Amanda Watson, Christine Zagrobelny and Jeff Aguiar, Raleigh’s James Anderson, Gus Allen, Julie Oliver, Jason Mark Durst, Josh Allen, Whitney Madren,  Riley Watson, and Benji Jones.

* * * * *
Burning Coal Theatre Company is Raleigh's small, professional theatre.  Burning Coal is an incorporated, non-profit [501 (c) (3)] organization. Burning Coal's mission is to produce literate, visceral, affecting theatre that is experienced, not simply seen. Burning Coal produces explosive reexaminations of overlooked classic and modern plays, as well as new plays, whose themes and issues are of immediate concern to our audience, using the best local, national and international artists available. We work toward a theatre of high-energy performances and minimalist production values. The emphasis is on literate works that are felt and experienced viscerally, unlike more traditional linear plays, at which audiences are most often asked to observe without participating. Race and gender non-specific casting is an integral component of our perspective, as well as an international viewpoint.