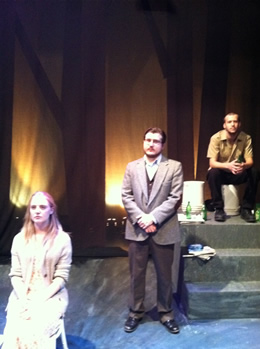 The Raleigh theater troupe The Delta Boys are running a sharp and tight new show at Burning Coal that opened September 29. Written by Irishman Brian Friel, the play is a nitroglycerin bomb — compact but packing a wallop. On a simple set designed by R. S. Buck, a woman who has been blind since the age of ten months becomes a pawn in a game that two men play, each for his own reasons. There is the possibility that Molly Sweeney (Burning Coal's Samantha Corey) might regain her sight; but the drive to make this happen is brought to bear for all the wrong reasons.

Molly Sweeney was written in 1996, based on an essay written by anthropologist Oliver Sacks, "To See and Not See" (1995). In it, Sacks examines the possibility that someone who has been blind most of his life might see again, and what this may entail for the individual. Who would not wish to see this person given such a gift? Who would not take the risk, for such a boon? Molly, an accomplished individual for a blind person, is a swimmer, a cyclist, is gainfully employed at a health club, and is an all-around happy individual. She meets the man who will become her husband, Frank Sweeney (Lucius Robinson), when he comes into the club and regales her, enthusiastically and for a solid ten minutes, on a minute subject that has become his latest money-making scheme. She is impressed with his enthusiasm, and when he comes back to ask her out, she accepts. He takes her dancing, which turns out to be the right thing to do. They are married shortly thereafter, despite the fact that he is unemployed and has no real prospects.

To Mr. Rice (Stephen LeTrent), the opthamologist who is consulted about Molly's blindness, it is clear that Molly is nothing more to Frank than his latest "project." But it is an opportunity for Rice to perhaps bring back a burnished shine to his lackluster career, by returning to a woman who has not seen since infancy the gift of sight. Rice accepts the challenge for the possibility of becoming a celebrity in his field, of being able to restore to his profession the now-lost ideal that he is a pioneer, like the other three opthamologists who were the top of their class at a now long-forgotten graduation.

The play is set in Ireland, in Donegal. The hospital is small and shabby, but Rice is able, on first one eye and then the other, to restore a modicum of sight to Molly, who has become a willing participant in her Restoration. But even though she has regained sight, she has a difficult barrier to overcome; for the life she has carefully built up for herself has been a life of darkness. Now that she can see, she must learn to see — she must make a new world based on light and shape, rather than the tactile world she is used to. This obstacle becomes the crux of the play, and while Frank and Mr. Rice attempt to "see" this obstacle for Molly, they do not understand it. Molly herself is left alone to struggle with this barrier, while the two men who fought so hard to win her this "boon" abandon her.

The entire story of Molly's "miraculous" restoration is told by these three individuals, each from his own distinct point of view. We become aware of Frank's other "projects," such as his plan to make cheese from Iranian pygmy goats. It is clear, also, that Mr. Rice has his own reasons for taking on this project. But sadly, neither of these two men learn what their real roles are in this project, and Molly, who would have never sought this avenue alone, is left to face a difficult and devastating battle alone.

Molly Sweeney has been played once before in the Triangle, at PlayMakers Repertory Company. This production was early in the play's life, while it was still being tweaked by the author. The cast at that time numbered six, using these three characters and a trio of minor characters who figure in the story. Having seen both productions, it is clear to me that this show, now devoid of the lesser characters, is a tighter and more potent script. Presented as it is in a Reader's Theater venue, the play is sharp, concise, and visceral in its intensity. The Delta Boys presentation gives the viewer a clear and shattering vision of what happens when those who must see do not see, and the terrible consequences when darkness overcomes light.

Note: Molly Sweeney continues through 10/9. For details, see the sidebar.