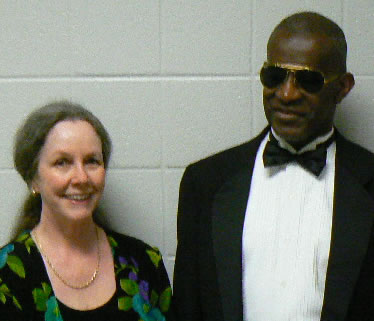 On the eve of Martin Luther King Day, Dr. James Longmire paid a tribute to the life and musical career of  Paul Robeson The beautiful stained glass windows and the intimacy of St. Michael's Episcopal Church only enhanced Dr. Longmire's warm bass-baritone voice; accompanied by Susan Timmons, they provided a diverse program of sacred texts, love songs, show tunes, and traditional African-American Spirituals, all of which was from the concert repertory of Robeson.

Paul Robeson was a singer, actor, athlete, and scholar who was an advocate for the Civil Rights Movement. He received a scholarship to Rutgers College where he played football and was valedictorian of his class. While furthering his education at Columbia Law School and playing professional for the NFL, Robeson pursued singing and acting in off campus productions. After graduating from Columbia Law School he became an international sensation, touring throughout the United States and Europe. He was the first black actor to portray Shakespeare's Othello. He became best known for his performance as Joe in the musical Show Boat with his version of "Ol' Man River". As his artistic career progressed, he increasingly became an influential political figure. While he promoted the ideas and political beliefs of American policy, he caught the attention of the FBI and CIA because of his relations with the Communist Party. Despite the fact that Robeson was internationally acclaimed, he was blacklisted in the United States. Although he was unable to perform in his homeland, his musical legacy still impacts the world today.

Dr. Longmire holds three degrees in music including  a Doctor of Musical Arts from the University of South Carolina. He is well known for his master classes and teaching, and for over 30 years has been impacting the singing world. Dr. Longmire's bass-baritone voice was incredibly rich and pure even when he moved to a higher range.

The concert began with a piece by Felix Mendelssohn, "Lord God of Abraham, from Elijah, followed by three pieces in French, Italian, and German. "Plaisir d'amour" composed by Jean Martini was especially beautiful in its translation. This song states the "The pleasure of love only lasts on moment; the regret of love lasts one's whole life." This beautiful French love song was made complete by the beautiful melody line and the richness of Dr. Longmire's voice.

He continued with famous show tunes from Porgy and Bess and Showboat. Paul Robeson is best known for his performance as Joe in Showboat and it was only right that Longmire performed his version of "Ol' Man River," a very soulful tune that expresses the hardships and uncaring nature of the Mississippi River. It is rare in musicals as well as in opera to have solos for baritone but this song is a notable exception.

A dramatic aria from Verdi's Don Carlo rounded out the first half.

Dr. Longmire also sang some traditional African-American Spirituals. "Go Down, Moses" was especially moving; the singer's facial expressions always matched the mood of the piece. It was especially fitting because part of this concert was meant to honor the life of Martin Luther King Jr., one of the most influential civil rights activists.

Dr. Longmire's passion showed through his subtle smile after each work had been sung. The connection between him and his pianist Susan Timmons was flawless, and it was clear they had been performing together for quite some time. Dr. James Longmire's tribute was a great way to celebrate the life of Paul Robeson and Martin Luther King, Jr., with music.

For a companion review of this concert, click here.