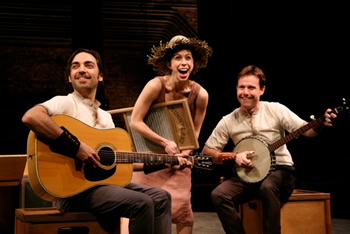 Apparently, there is no snazzy antonym for "fiasco," which is what's needed to describe Fiasco Theater's charming production of Shakespeare's Cymbeline, currently, though briefly, on stage in Reynolds Theater, courtesy of Duke Performances. Fiasco is what in the current parlance is called an "actor-based" theater, which means they do their thing without benefit of set or much in the way of props or costumes or fancy lighting (although here all are cunningly designed beneath their seeming simplicity). One thing that sets apart this joyously energetic young company — all 2007 MFA graduates of Brown University/Trinity Rep's acting program — is their exuberant musicality.

Six chairs, each with musical instruments beside it, form an arc mid-stage. When not speaking one of their multiple roles, the six actors sit there behind the action, which all occurs downstage, close to the audience. Music and musical sound effects — from the chairs or in the action — emotionalize, clarify, and punctuate the sometimes-confusing story. This is not William Shakespeare's greatest work. Though it contains many of his regular concerns and tropes and comic bits, the cake batter, so to speak, was not well-stirred. Still, it rises, and hey—why not have some fun with it? Where the script is maybe a little lumpy, the actors employ a knowing drollery that in no way detracts from their expressing deeper emotions, like loyalty, jealousy and murderous ambition.

The actors all sing beautifully, and their harmonies would be enough to take you to the show, even without the play. They vocalize in an "old-time" style often associated with the southern mountains, but hearing it within Shakespeare makes us remember the English and Celtic sources of that musical sound. It is very powerful.

Cymbeline on stage is just the beginning of Fiasco Theater's two-week residency at Duke. The upcoming free, public, programs include conversations and open rehearsals, and the residency culminates with two (ticketed) workshop readings of Measure for Measure in Duke's Sheafer Lab Theater. Fiasco's appearance provides area theater aficionados a great opportunity to experience divergent Shakespearean production styles, performed at a high level. You can go right from the fresh simplicity of Fiasco's low-cost, low-tech work (similar to, but more controlled than, the past work of Shakespeare & Originals, the loose company now morphed into the Little Green Pig Theatrical Concern) to PlayMakers Rep's full-tilt, high-production-value version of Henry IV and Henry V. The bright merits of both will shine in the comparison.

Cymbeline plays only through Sat., Feb. 4. See the sidebar for details. As noted, the company returns Feb. 17-18 for Measure for Measure; for details of thoseperformances, click here.