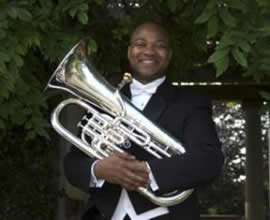 This preview has been provided by Triangle Brass Band.

Please join the Triangle Youth Brass Band and the Triangle Youth Brass Ensemble, directed by Tony Granados and Jesse Rackley, as they open their 2012 season with “Across the Pond”, brass band music from the other side of the Atlantic Ocean, on Saturday, February 4 at 8pm in Meymandi Concert Hall in the Progress Energy Center for the Performing Arts.

Sharing the stage with the Triangle Youth Brass Bands is James Jackson III, principal euphonium of the United States Coast Guard Band.  Jackson is also presently the director of the Connecticut College Orchestra, the music director and conductor of the Thames Valley Youth Symphony Orchestra, Lecturer of Euphonium Studies at the University of Connecticut, Professor of Euphonium at the Hartt School, and a member of the euphonium quartet, Alchemy. He has also performed as a soloist with many prestigious ensembles throughout the United States and is a first planner winner in euphonium competitions. He is a frequent clinician throughout the United States, Canada, and Europe at numerous universities, colleges, and public schools.  Jackson is currently pursuing the Doctor of Musical Arts degree in euphonium performance with an emphasis in instrumental conducting at the University of Kentucky in Lexington.

For tickets and more information, please visit the Triangle Brass Band website at www.trianglebrass.org.  Tickets are $15 for adults, $7.50 for students, and free for children two and under. They can be purchased at the door of the concert or through Crown Tickets.