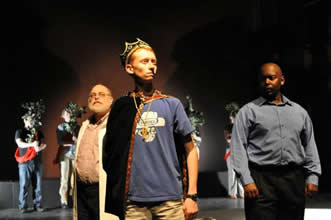 Some would-be writers spend ages filling notebooks with so many ideas that never take them anywhere, but that was certainly not the case at KidsWrite 2012. Hosted by the Burning Coal Theatre Company, the fifth annual festival of new plays by students from 6th through 12th grade featured five diverse stories. They were performed in a professional theater and the scripts were published for public use. The cast and crew were adult professionals from Burning Coal and other local companies, with the exception of three high school students – Philipp Lindemann, Tara Polhemus, and Anastasia Zitko – who performed with great flair and could have fooled the audience into thinking they were already professionals.

The first play, I Am…Macbeth, by thirteen-year-old Aubrey Clyburn, from Ligon Middle School, was a full one-act play, based on Shakespeare's Macbeth, with three teenagers studying for their Shakespeare test thrust into the story. Clyburn's mixture of contemporary and Shakespearean dialogue, as well as the blends of fantasy and realism, comedy, and suspense, were admirable, keeping the classic story from dragging along too much.

After a brief intermission was Review, by Colton Flick, a graduating senior at Raleigh Charter High School, detailing the course of a relationship as reviewed through flashbacks and dialogues. It was intimate but also delightfully vague, challenging the style of realism by allowing the characters to know that they are in a play and interact with the audience. It lacked a real resolution, letting the characters decide when the audience could clap, which was quirky and clever.

Next was 00? (pronounced "Double-Oh-What?"), by Hannah Groover, a freshman at Green Hope High School. This comedy led the audience in many directions, keeping the background of the characters a mystery until a few compelling plot twists at the very end. The tongue-in-cheek wit shone through and the audience was very entertained, if a little confused – but I think that was Groover's point.

The fourth play, The Phantom Dirigible, by Alexandra Wimberly, senior at the Durham School of the Arts, was as imaginative and mysterious. Her biography in the program explained that Wimberly was given the lowest possible score on her fourth grade writing test because the given prompt was "beneath her" and she chose to write something else. That same resilience is detailed in the main character of her play, who is forced to choose between a stale life that has been planned for her and the thrill and danger of adventure in a new world.

Finally, Hope Reilly, a graduating senior at Leesville Road High School, presented I Miss Her, a story about two students in a relationship about which they have very different ideas. The characters sit across the stage from each other, very disjointed and never actually speaking directly to each other. They give monologues to the audience about each other until the second-to-last, climactic scene, where they must confront each other. The final scene introduces the janitor, who puts the entire play into a different perspective in just a few minutes.

All five playwrights were imaginative, thought-provoking, and talented, and it was a pleasure to hear what they had to say. They are not just lucky, but have certainly earned their chance to have their plays published and professionally directed and produced by Jerome Davis and Adam Sullivan, and all five – as well as their families – should be proud.

Burning Coal will host two Summer Theatre Conservatory classes for middle schoolers and high schoolers. See our calendar or the company's website for more details. Their next season will open September 6th with Brigadoon.