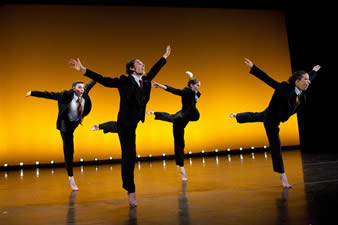 Monica Bill Barnes might be called the Sandra Bullock of contemporary dance. She’s strong, agile and good-looking, with a high-wattage smile. She radiates good health, cheer, and curiosity; displays a wacky sense of physical humor, and she just seems so darned nice that you can’t help but enjoy her gags and pratfalls. Her sincerity is so apparent that one wouldn’t think to question it. This artist doesn’t protect herself with ramparts of concept, philosophy or satire or mystifying ambiguity. She makes dance stories about her life and her work and her feelings (of which pleasure at living in a human body is one). In doing so, she entertains while touching on vital emotions and sensations, and she does it in a very female way. Maybe the better film comparison here is to the late comic screenwriter Nora Ephron.

Barnes and the three other women in her company danced a thoroughly enjoyable three-work program Sunday night in Reynolds Theater (runs through July 3), as the American Dance Festival moved into its third full week. Sunday marked the premiere of the ADF-commissioned Luster, a duet for Barnes and her dance partner Anna Bass. The women have worked together for ten years of struggle and triumph and survival as dance-makers in show business, and the scenes that Barnes has contrived to show the story are broadly funny and surprisingly powerful in their deft gestures of enduring friendship.

Barnes draws from any period or genre of staged art that suits her story, from Punch-and-Judy, to vaudeville, to glamour-gown cabaret, to basketball. The bubbling delight of it is that she makes a confection, not a mash-up, from it all, and she and Bass frolic through it with an athletic enthusiasm, jamming powerfully in their sneakers to Tina Turner’s “Proud Mary,” Nina Simone’s “If You Knew,” and Lionel Ritchie’s “Angel.” Between the latter two songs, they engage in a long circular dance to the instrumental “Undon Hulu” by Ólafur Arnolds. As far as dance goes, this is the power heart of the work. The two women circle the stage, sneakers squeaking, in a slight crouch, torso bent, one arm extended horizontally as if for balance, the other steadily churning. Then suddenly, they are arm-pumping champions and the circle is invaded by stagehands bearing flowers. They set up chairs, and the dancers perform the entire Ritchie song seated, as bright confetti showers behind them. The curtain falls, leaving a last image of moving feet, flashing in the bright narrow band beneath the lowering curtain.

The rest of the program consists of two works, from 2010 and 2011. The earlier, mostly fanfare, , danced to a medley sung by Nina Simone, uses three women, all of whom appear in subdued over-the-knee navy blue skirts, white camisoles, and white ostrich feather headdresses. This costuming effectively conveys the workaday aspect of stage arts. The dancing involves a lot of mincing, trotting, prancing little steps, and much parading back and forth diagonally across the stage, and much practice of preening (humbly) before an audience. There are many amusing scenes, and a few with visceral punch, mostly involving the inexplicable but threatening incursion of sealed packing boxes, hurled in from offstage. There is also some impressive circus-style balancing — while dancing. It is all very smart and good-spirited, but it went on just a little too long.

I felt the same way about Everything is Getting Better All the Time, even though the music was classic Otis Redding live. The dance, for four women, was one or two ideas short of carrying us all the way to the end with ever-fresh energy. However, it was adorable, funny, athletic, visually stylish and studded with glorious bouts of dancing. And, it includes some fine baton twirling, which you don’t get to see just any day. Everything definitely is better by the end of this fun show.