A Cool and Refreshing Wind in the Midst of Summer Heat 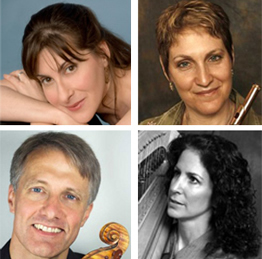 The summer concert, co-presented by Duke University Department of Music, Office of the Vice Provost for the Arts, and the Sarah P. Duke Gardens, offered the Ciompi Quartet in a program titled, “Dancing in the Wind.” Their program featured three contemporary works addressing wind in their titles. Actually only the first work on the program was an attempt to portray wind in musical metaphors and as such it was a fascinating piece to hear. Embracing the Wind (1999) for flute, viola and harp by widely performed American composer Robert Paterson was inspired by the image of an Olympic athlete running against the wind.  Paterson uses glissandos and arpeggios, bent notes and such techniques as crescendos and diminuendos and repeated motives to suggest the movement of unseen wind. Some of the effects were quite subtle and others were strikingly wind-like. The second movement evokes the runner in slow motion. In other sections, one senses gusts, zephyrs, and wisps. Musically, Embracing the Wind was satisfying and a fascinating listen.

The remarkable artists performing were world-renowned flutist, Laura Gilbert, who has appeared with the Borromeo, Brentano and Saint Lawrence String Quartets and major orchestras in New York; acclaimed harpist Stacy Shames who has appeared widely in the United States, Europe, Canada and the Far East. The Ciompi Quartet’s own exceptional violist, Jonathan Bagg completed the trio. Their ensemble playing was precise, technical challenges were handled with aplomb and musical interpretation was consistently effective.

The second piece on the program was well-known Japanese composer Toru Takemitsu’s And Then I knew ‘twas Wind (1992). The suggestive title comes from the poetry of Emily Dickinson and here wind is dealt with in a more mystical, even spiritual sense. The music flows and develops smoothly and dreamily. Such music invites the listener to look inside and discover the true self. It is a fascinating reality that the Hebrew word for wind – ru’ach – is also the word used to define the spirit of God. The performance of Takemitsu’s music was so artful as it realized all these mystical and spiritual concepts.

Following intermission, the instrumentalists were joined by soprano Ilana Davidson. Her singing was characterized by a mastery of the high tessitura and careful enunciation of text. The work was John Tavener’s To a Child Dancing in the Wind (1983). Tavener is best known for his austere and transcendent choral music written during his time as a committed Greek Orthodox Christian. To a Child Dancing in the Wind is a setting of eight poems by William Butler Yeats. Here Tavener finds himself at home with the tender and spiritual transparency of Yeats poems. The journey takes us through dreams, the fleetness of beauty, wind, separation, loneliness, nostalgia, fear and death. The last poem, “The Countess Cathleen in Paradise,” a setting in four quatrains, was sung unaccompanied by Davidson as she walked slowly out of the hall. The music was Tavener’s creation in the style of a traditional Scottish ballad. It was an eerie and moving effect to end the piece.

The concert was a refreshing and cool pleasure in the midst of these hot summer days. The next concert in the series, a month off, will feature music by Shostakovich, Beethoven and Prokofiev performed by Fred Raimi, Richard Luby and Clara Yang. See the CVNC calendar for details.