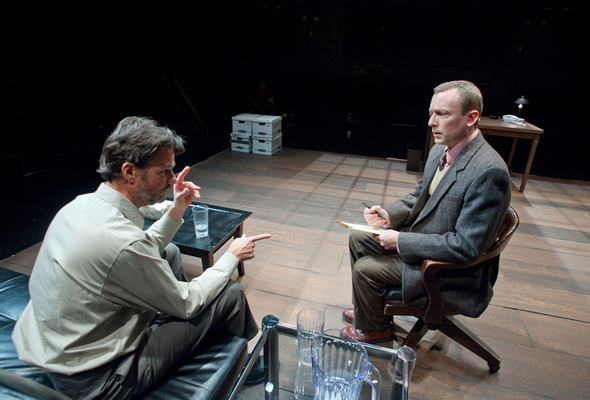 If somehow you have not seen plays by Conor McPherson (Irish, b. 1971), Shining City, which just opened at Burning Coal Theatre Company (BCTC), is a fine place to start. McPherson works along the edge of the otherworldly in mundane situations in the lives of ordinary people. His stories do not avoid the sordid. His language may not be acceptable to those who cannot tolerate “the f word.” The work is not exactly elevating, but it stretches your humanity. If you are already a fan of the powerful playwright, know that this production equals the company’s earlier mountings of McPherson’s work.

Shining City is directed by BCTC’s Artistic Director Jerome Davis, who has made rather a study of McPherson. Davis has drawn the four actors to a high pitch of psychological tension. John Allore as John, a man brought to the brink of madness by his late wife’s ghost, must carry the play with his long monologues — and Allore carries it. He’s been an interesting actor to follow, and here he has made a huge leap. John unfolds his story to Ian, a psychotherapist — all the action takes place in his Dublin office—whose own psychological travails form a counterpoint to John’s. As Ian, James Anderson also excels himself. We don’t get to see much of them, but Laura Tratnik as Ian’s girlfriend, Neasa, and Nic Carter as Laurence, a young man Ian brings back from the park, fill their roles well.

The play is not as frightening as billed, but it is suspenseful and chilling. The sense of mystery and impending trouble is greatly intensified by Matthew Adelson’s lighting, which is unobtrusively creepy. I especially enjoyed the changing light on the suggested cityscape outside the office windows. The setting stays the same throughout, but the scenes in it change numerous times, and Davis has used those darkened moments to further heighten the tension, drawing them out as stagehands slowly, ghost-like, move the props.

I don’t want to spoil the story’s surprises for those who don’t know it, so no re-cap. Both John and Ian struggle through some difficult times, and McPherson, Davis, Allore and Anderson make you empathize with them, however distasteful you may find aspects of their behaviors. That’s a mark of greatness.

Shining City continues at Burning Coal Theatre through Sunday, November 18. For more details about this production, please view the sidebar.