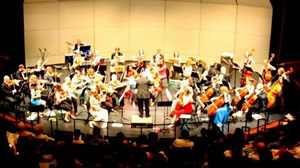 This preview has been provided by the Really Terrible Orchestra of the Triangle (RTOOT).

The Really Terrible Orchestra of the Triangle (RTOOT) announces their 2012 Winter Concert, “Hallelujah and Hobbits”. To celebrate the season the RTOOT will be playing... wait... Hobbits? You’d think a holiday concert might be “hallelujah and angels” or “hallelujah and Santa’s elves”... but Hobbits? It appears that, once again, the RTOOT will offer its audience a delightful combination of orchestral music and unexpected humor.

Tickets are $7.00 and may be purchased at the door or from an orchestra member.

In the Triangle area, the RTOOT started in May 2008 and is currently composed of approximately sixty musicians all of whom practice diligently and make every effort to play wonderful music with as much skill and accomplishment as possible. However, it is an RTOOT concert. And one can only imagine what might happen when the RTOOT attempts to celebrate the season.