Passion at the Piano: Joyce Yang at Duke Performances 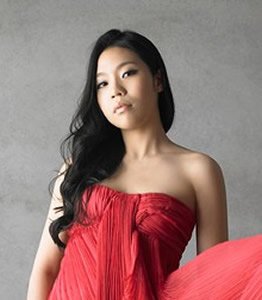 Her fierce prowess on the Steinway makes one think of something sleek and powerful — a cheetah or a jaguar — that knows how and when to go blisteringly fast; when to move slowly on velvet pads, and when and how long to pause before pouncing. Saturday night, Yang’s phrasing was often fresh, and sometimes slyly witty. There were a few places, in the Chopin Nocturnes particularly, where a little more life experience may beneficially give her greater melancholy and nuance, but overall her dazzling playing was well-served by the powerful program.

The evening opened with Beethoven’s sparkling Sonata No. 18 in E-flat, Op. 31, No. 3, “The Hunt.” I don’t think I’d heard it in its entirety since I was a child and the old Artur Schnabel recording was in heavy rotation at my parents’ house. Yang’s interpretation, while forceful and crisp, bubbles with delight as the musical motifs chase each other up and down the keyboard. After frolicking all over the countryside, she took a deep breath, and blistered the ivory on the final movement, presto con fuoco.

Two Chopin Nocturnes followed, Op. 48, No. 1 in C minor, and Op. 55, No. 1 in F minor. I am very picky about Chopin and have personal preferences that made Yang’s version of the C minor piece sound too hard and reverberant for me — I prefer a more melting sound — but the gentlemen either side of me were stunned and slack-jawed at its conclusion, as I was for the second piece, the F minor, in which the crisp certitude felt more appropriate.

It certainly led up well to a walloping piece of Bartók with which I was previously unfamiliar. Composed in 1926, Out of Doors Suite, Sz. 81, comprises five movements, the outer two of which are very percussive and frequently recall Stravinsky. The three inner movements are quieter, gentler, their rhythmic motion that of folk tunes and their sound motifs those of insects, frogs and rustling vegetation. It is a fantastic piece of music, and an excellent platform for Yang to display her force-of-nature power. It also confirmed her sense of humor: the suite’s final two movements were called “Night Music” and “The Chase,” making neat references to both the Beethoven and the Chopin.

After intermission came a trio of transcriptions by virtuoso pianists of pieces by other virtuoso pianists, kicking off with Chopin’s Op. 74, No. 12 (“My Joys”) arranged by Liszt as No. 5 in his Six Chants Polonais, S. 480. Yang’s performance was ringingly joyful. I could have listened to this two or three times, but Yang segued almost without pause into Earl Wild’s version of Rachmaninoff’s Dreams, Op. 38, No. 5 before moving right into Wild’s take on George Gershwin’s The Man I Love, her clarion notes bouncing and splintering like rhinestones sparkling on blue velvet. This sequence put one in an ecstatic whirl even before Yang began the “big” piece: Rachmaninoff’s Sonata No. 2 in B-flat minor, Op. 36 (revised 1931 version). This storm of music begins allegro agitato and ends allegro molto, with a slower central section. Passionate and sensual, Yang made it a thrilling climax to the exciting program.