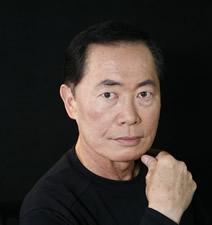 The North Carolina Symphony, following up on its recent John Williams fete, delighted local audiences at Meymandi with an evening focusing on the music of science-fiction, both televised and on the big screen, with the presence of special guest George Takei, the creator of the role of Sulu on the original Star Trek, and now massively popular on Facebook. The pre-concert atmosphere was Disneyesque, with figures costumed as Chewbacca, Darth Vader, Boba Fett, R2D2 and C3PO available for photos with excited listeners (ranging from five years old to late middle age).

Jack Everly, a widely successful pops conductor who has also worked extensively on Broadway, directed the NCS and was an informative host for the evening, which began with a bang (literally!) with the opening title from Star Wars by John Williams. Next up was a medley (arranged by Everly) combining various television themes – we were challenged to see how many we could identify, and indeed later there was a quiz. Two more themes from John Williams (E.T and Superman) sandwiched Somewhere in Time (John Barry), where, since the theme is travel backwards in time, the atmosphere was less science fictional than nostalgically romantic, with a lovely English horn solo setting the mood.

Finally, the moment all were waiting for...: the arrival of George Takei, who, simply by walking onstage, merited a long, loud and enthusiastic ovation. His entertaining banter with Everly helped introduce soprano Kristin Plumley (fully decked-out in red Star Trek mini-skirt), there to provide the soaring voice for the theme of the original series (wildly applauded). The first half concluded with the complete themes for all the remaining ST series – DS9, Enterprise, Voyager and The Next Generation.

Returning from intermission (and more photo ops) listeners were greeted by the iconic opening of Also Sprach Zarathustra (here identified only as 2001), followed by more John Williams – the suite from Close Encounters, certainly one of the most "modern" of scores by the composer, with little or nothing in the way of his characteristic and quasi-military fanfares and rhythmic ostinato, recalling the earlier twentieth-century sounds of Mahler and other Viennese. The younger generation of Star Trek fans were treated to the dark sounds of Michael Giacchino's music for the two recent films.

Very interesting, and quite unfamiliar to most concertgoers, was the music by Bernard Herrman for The Day the Earth Stood Still (1951). In the presence of so much John Williams, this music was strikingly different – much more modern (in spite of being the oldest music on the program, except for the Strauss), more expressionistic, less optimistic/forward looking….appropriate for a moment when the developed world had to come to terms with nuclear self-destruction. Takei appeared once more to deliver the speech/ultimatum of the alien Klaatu from the film, warning humanity that their aggression will not be tolerated. Concluding the program were two more Star Wars excerpts – duel music from Episode 1, and the Throne Room/End Title from Episode 4.

Everly is a masterful conductor of these genres, with an unusual but effective baton technique, often leaping upwards to emphasize a subsequent downbeat, and the music gleamed with Technicolor brilliance – full of excitement and rhythm. The Concert Singers of Cary made a big contribution, usually as simply another orchestral color, rather than a featured element, and the sound design was usually well-balanced so that the chorus was neither too loud nor too soft, but on the edge of audibility (one exception being the beginning of the final Williams set, where the chorus was too heavily amplified). All in all, it was an entrancing evening, and I am sure many were moved to tears (those in my row certainly were). The program, close to being SRO, unquestionably brought in many concertgoers who are not regular attenders of NCS events, with a much younger demographic evident. Maybe it's time for the NCS to plan a set of regular-season events specifically targeted at those under 50 (or even under 30!)

This program will be repeated June 28 in the same venue. For details, see the sidebar.

Note: For a letter to the editor concerning this review, click here.