Historic Interpretations, Inc. in Partnership with The Town of Cary presents A hiSTORYstage production of The Hollow Crown

Uneasy lies the head that wears a crown – William Shakespeare 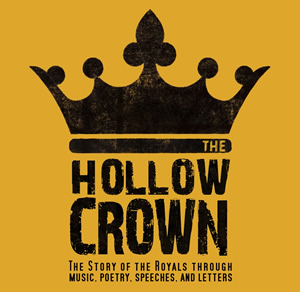 The following preview has been provided by Historic Interpretations, Inc.

hiSTORYstage, the theatrical performance company of Historic Interpretations, Inc., continues its inaugural season with The Hollow Crown. The production will run July 26-27, 2013 at Common Ground Theatre (4815B Hillsborough Rd) in Durham and August 1-4, 2013 at the Sertoma Amphitheatre in Bond Park (801 High House Road) in Cary. Performances are July 26-27th at 8:00 pm  and August 1-4 at 6:30pm. Tickets for the Common Ground performances are $10.00 each, while a $10 donation is requested for the performances at Sertoma Amphitheatre. For ticket reservations, call 1-800-838-3006 or visit www.historystage.org. For more information about the production, please call 919-339-1558.

This unique theatrical work is an evening's entertainment by and about the Kings and Queens of England. The action unfolds through music, poetry, speeches, letters and other writings as the players bring to life British Royals from William I to Queen Victoria; and singers intersperse songs from the proper periods - some of which are sad tunes on the death of kings while others are uproariously funny.

A favorite of the Royal Shakespeare Company, The Hollow Crown has enjoyed perennial success since it hit the stage in 1961. What makes The Hollow Crown remarkable is that, in some instances, the audience is hearing the story in the monarch's own words.

While it may sound highly academic, the play is not a history lesson, but instead a piece of compelling entertainment.  The Hollow Crown will appeal to those with or without a firm grasp on history.

Alison Davis and Linda Depo direct The Hollow Crown, assisted by musical director Jaclyn Bell and assistant musical director Angie Daughterty Davis. Linda has been actively involved with theater and the arts since moving to NC in 2004. Alison has directed plays for Cary Playwrights' Forum. Jaclyn previously directed The Telling of the Tale at Historic Interpretations’ VanTassel Harvest Ball and directed the music for hiSTORystage’s St. George and the Dragon.

Clint Lienau (Chamberlain) recently appeared in the hiSTORYstage productions The Marowitz Hamlet (Hamlet), and Saint George in the Dragon (Saint George), and is currently an afterschool counselor at North Chatham Elementary. Jorge Ivan Santos (Captain / Doctor) appeared as John Finney in Saint George and the Dragon, the Captain and the Priest in The Marowitz Hamlet, and also several of his own original one-act plays, and short films. Patrick Berry (The King) most recently appeared on stage as Helen Keller's father in RLT’s The Miracle Worker. Heather Shore (The Queen) previously portrayed  Hesther in Equus, Annie Sullivan in The Miracle Worker, Maggie in Jakes Women, and Lenny in Crimes of the Heart. Roberto Bricchi (The Knight) caught the acting bug at age 8, and most recently appeared in Clybourne Park for his college. Michele Okoh-Bernis (The Lady of the Court) has appeared in such performances as For Lucy (ArtsCenter), Waves of Mu (Duke), An Inspector Calls (Duke), and Fences (ULL).

In addition to Clint Lienau and Patrick Berry, the ensemble of singers and musicians includes Victoria Deese, who most recently appeared as Queen Elizabeth in the hiSTORYstage production of St. George and the Dragon;  Fiona Dunn, a musician, seamstress, writer, and artist who also appeared in St. George and the Dragon;  Laura Griffin who was last seen in RLT’s Snow White, the Queen’s Fair Daughter;  Scott Renz who appeared in 41 stage plays and Historic Interpretations’ film, Let Tyrants Fear; and Caroline Witherspoon, is a trained coloratura soprano and a longtime participant in Historic Interpretations programs.