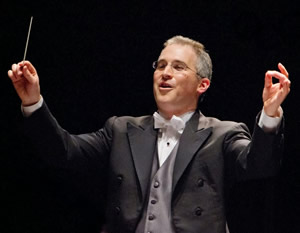 The Triangle Wind Ensemble presented "Shout for Joy: Symphonic Masterworks for Wind Orchestra" this weekend at the Cary Arts Center, offering essential repertoire of the wind ensemble by four of the most popular composers in the genre. Under the direction of Dr. Evan Feldman for the third consecutive year, the Triangle Wind Ensemble has been performing since 1999. It is a semi-professional ensemble that performs wind ensemble works as well as transcriptions of orchestral works, popular songs, and medleys.

The ensemble opened the concert with a spirited Percy Grainger march, "Lads of Wamphray." It took a little time for everyone to warm up in timing and energy, but aside from lacking a little dynamic contrast, the rendition lived up to Grainger's inherently lively and intricately layered style. Following the opener, "Elsa's Procession to the Cathedral," from Richard Wagner's opera Lohengrin, showed off talented soloists among the group. The opening flute solo accompanied by English horn and oboe is a dangerously transparent and exposed moment in the music, but these players shone. The brass also served as a solid, balanced, and voluminous base as the work gradually built to a climax. This arrangement, by John Bourgeois, who added an ending to "Elsa's Procession" based on the finale of Wagner's opera, let the ensemble flex its brass muscles with soaring horns and heralding trumpets after the long, multilayered woodwind section that is most of the beginning.

Ending the first half of the concert, Gustav Holst's "Jupiter," from The Planets, provided high-spirited and virtually singable tunes that have appeared in motion pictures throughout the decades. Performed in a concert setting, "Jupiter" still brings joy to listeners just like the planet for which it is named. Feldman led with an explanation of the piece, describing how each of the five or six melodies that appear throughout the movement are all based on a three-note motif and asking players to demonstrate by playing excerpts. Feldman was so enthusiastic that he nearly leaped onto the podium. The ensemble matched his vivacity with energetic, mostly precise playing, with just a few murky moments of intonation. More volume might have been preferable for such a dramatic work, but the sections remained balanced.

David Maslanka's Symphony No. 4 for Wind Orchestra served as the second half of the concert and a final masterwork to end the evening. Maslanka's symphony is a more recent work and was the basis of the concert's "Shout for Joy" theme. The structure and scope of the composition are difficult to explain, featuring Gustav-Mahler-esque journeys and transformations throughout a slow-paced work. Maslanka himself provided this explanation, quoted in the program notes: "The central driving force is the spontaneous rise of the impulse to shout for the joy of life…, the welling-up shout that cannot be denied… The response in the voice of the Earth is the answering shout of thanksgiving, and the shout of praise."

The opening horn solo that may have started a little shakily gave way to a full ensemble sound that was deep, majestic, and hopeful. Later, carefully-timed rhythmic sections fell seemingly into chaos in a much more experimental, 21st century way. A full range of percussion instruments did not go unnoticed; these were executed well, from timpani and xylophone, hi-hat, and tam-tams, to bowed vibraphone bars and rattles. The piece swung between traditional chorales, blinding percussive sounds, and even jazz themes – the latter served as a backdrop for an especially impressive alto saxophone solo that ran the entire range of the instrument! Another particularly impressive moment was the juxtaposition of a partial woodwind chorale and ghostly moans created by two clarinet players using only the mouthpieces. These eerie sounds helped the listener appreciate the final, sonorous sound of the triumphal chorale that ended this monumental work.

The triumphant ending of the symphony rounded out the glorious, joyous theme of the concert. Each work explored the idea of rejoicing in life's bounty, but from a different angle. Where the "Jupiter" presentation was blatant, "Elsa's Procession" was placid and introspective. Where "Lads of Wamphray" was melodic and energetic, the Symphony No. 4 was complex and chaotic.

Since my review of Feldman's debut with the group two years ago, the Triangle Wind Ensemble has developed by leaps and bounds. This concert was not only precise but overall very impressive. Its sound filled the auditorium but never overpowered the audience; its blend was nearly always balanced. This group is one to watch and to celebrate over the course of this season.

The ensemble's next concert, "Happy Holidays," will take place at the NC School of Science and Mathematics on December 15 at 7:00 p.m. For details, click here.