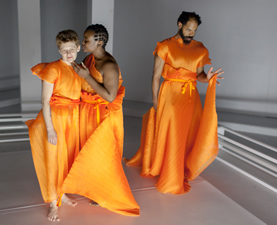 Duke Performances is currently hosting the New York-based theater company Hoi Polloi as they present a brand new staging of a very old topic. The company has brought to Duke Performances their distillation of Plato’s mighty tome The Republic. Playwright Noah Mease has created a short but pointed work that runs just 75 minutes. The result is Hoi Polloi’s avant garde staging of Mease’s Republic. The show has been brought down to Durham for a premiere staging at Manbites Dog Theater.

The setting allows for only about fifty people per performance, as the audience is seated in one row that completely surrounds the set. Massive columns reach to the ceiling, punctuated by four towers in which sets a neon tube. These portable light boxes are the only lighting onstage; they are movable and can be regulated from full bright to total darkness — which is how the piece begins.

In a completely dark theater we are given the impression that people are whizzing by us. Three actors are moving about the set in the dark, silently except for the padding of their bare feet. This introduction, we were later told by director Alec Duffy, was designed to clear the mind and slow the heart, allowing us to forget what was outside in order to focus on what was within.

Soon the lights come up and we see three characters: Socrates (Lori E. Parquet), Glaucon (Jason Quarles), and Boy (Jess Barbagallo). The three continue to move about the set, but now that the lights are up they begin a conversation. What is the point, asks Glaucon, of being good? If there is no hereafter, there are no consequences, what is the point of doing the right thing? It is from this seemingly simple question that Plato expanded enough thought to fill ten volumes, each one containing over three hundred pages.

Republic attempts to distill these many pages into a brief synopsis. The result is not so much theatre as it is a theatre piece. There is a minimum of dialogue and a large portion of that dialogue is taped and played over the actions of the actors.. The jist of the play is the creation of a city utopia, where the three classes — worker, soldier, ruling class — each is happy in his own work. The soldier would be happy defending the workers, who would be happy each contributing his own work to the common good, and all would be happy to be ruled by a philosopher-king, who headed the ruling class. The rest of the play is spent poking holes in this oversimplification.

Duffy and company have arrived in Durham to produce this work at Manbites for a week. The play is swift, crisp, and well honed, distilling the massive premise into a short but thought-provoking stage piece.

Costumes by Oana Botez are simple, wavy dress-like costumes that flow constantly in bright orange. Lighting designer Yi Zhao’s light boxes are used to advantage on a set designed by Mimi Lien. The whole seems to be a well-directed, well-thought-out work designed to stir the imagination and direct it toward Greek philosophy.

Seems to be. The problem is that the performance may well be too esoteric for general audiences. The audiences found in Durham, or the Triangle in general, are educated enough to be at least tangentially familiar with Plato’s The Republic. And for those unfamiliar, there is a discussion after the play to help in the understanding of the work — provided the audience is interested enough to stay for it. But plop this play down in a city not as well-educated as this one and the people are going to stay away in droves. The work is just too dry, too esoteric, to be generally palatable. Gather an audience who is unfamiliar with the Greek subject and the viewers are likely to come away quoting Shakespeare: “It was Greek to me.”

Republic continues at Manbites through Saturday, March 1. For more details on this production, please view the sidebar.