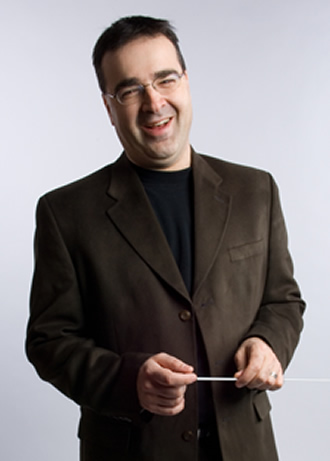 The North Carolina Symphony kicked off its last pops concert of the season with the first of four performances of Disney's Fantasia on Thursday, May 15, in Raleigh. The multimedia concert combined the live music of the North Carolina Symphony, under the direction of Ron Spigelman, with footage from Disney's 1940 Fantasia and its long-delayed 1999 sequel, Fantasia 2000, drawing a diverse crowd: young and old, families, young couples, and more seasoned fans of the Symphony. No doubt the combination of live classical music with a classic Disney film drew a unique audience, expanding the range of appeal for the North Carolina Symphony.

Walt Disney originally conceived of Fantasia as a traveling piece, aiming to bring classical music to a wide audience with top-notch performances and a rotating set of pieces. The 1940 original has certainly been responsible for exposing many young people to great music, and Disney must be credited for the breadth of his musical interest and promotion. The musical choices ranged from traditional, established pieces like Bach's Toccata and Fugue D minor, BWV 565 (arranged for orchestra by Leopold Stokowski), to popular pieces like Tchaikovsky's Nutcracker Suite, to ultra-modern music like Stravinsky's Rite of Spring. Also notable in the film are the orchestra – Stokowski, at the height of his musical prowess, conducting one of the great orchestras of the 20th century, the Philadelphia Orchestra – and the film's narrator, Deems Taylor, the godfather of American music journalism and criticism. Fantasia 2000 picked up some of that inventiveness, offering traditional classics like Beethoven's Fifth Symphony, and more modern pieces like Shostakovich's 2nd Piano Concerto.

While Spigelman was engaging as a conductor and as a speaker, the orchestra, unfortunately, was not at its best. The Fantasia films were recorded as music first, and later aligned with animation. Spigelman noted that the Symphony's presentation was the reverse, more like laying music down for a film score. The orchestra played in front of a giant projector screen, and Spigelman had at his side a smaller monitor displaying a bar count with dots to show the beats and a cursor to denote tempo changes. In other words, the performance was essentially not the North Carolina Symphony's; they were mimicking performances from the Philadelphia Orchestra under Stokowski (Fantasia) and the Chicago Symphony Orchestra under James Levine (Fantasia 2000). At times, the orchestra seemed to be struggling to keep pace with the film, and at other times had to compensate by slowing down too much. Several string entrances were not together, and the music had a disjointed feel in general.

Nevertheless, the aim of Fantasia as a film, and of pops concerts in general, is to expose concert music to a new group of constituents, and to that end, the concert was successful. The unforgettable image of Mickey Mouse as the sorcerer's apprentice has brought Paul Dukas' music to an entirely new audience. Coming back to this music as an adult, I was struck by the inventiveness of Dukas' harmonies and form, the range of his orchestration and development. In the rarified world of classical music, Dukas is probably more important as the teacher of 20th-century giant Olivier Messiaen, but for most of us, he is the composer who put Mickey Mouse on the screen as a mischievous character.

Other music highlights included the ending of Stravinsky's Firebird Suite, which caused the audience to jump at the beginning of "The Infernal Dance of King Kashchei." Respighi's Pines of Rome was another masterpiece, unique in its edgy but approachable harmonies, though shortened because of the film requirements.

Much of the music in Fantasia and Fantasia 2000 is unfortunately abridged. Fantasia 2000 was premiered in IMAX, which limited the film's length. 75 minutes is not enough to perform eight substantial works of classical music, so choices had to be made. But for me, performing the first movement of Beethoven's Fifth Symphony and leaving out the development and most of the exposition is like handing someone the last third of Les Miserables and explaining, "This is what great literature is like." While the language and characters might engage the reader, he still misses out on the scope of the entire work. Yet we can hope that Fantasia, both as a film and as a concert, will continue to inspire children and adults to seek out a wide range of classical music.

Spigelman also provided doses of Fantasia trivia throughout the night; I had no idea that Bela Lugosi was called in as a model for the artists working on the original Fantasia, or that Peter Schickele (a.k.a. P.D.Q. Bach) arranged the music for Fantasia 2000. His introductions made the music accessible to everyone, and this concert, though not featuring the best of the North Carolina Symphony, certainly would be a great choice for bringing a friend, or uncle, or niece who has not heard much symphony music before.

Three performances remain through Saturday evening, and tickets are available at ncsymphony.org. For more information on these performances, please view the sidebar.