Magnificent Franco-Belgian Program at the NCMA 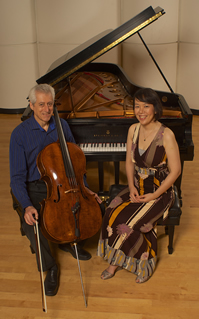 A program of great sonatas for cello and piano, tied to the NC Museum of Art's collection of French masters, drew a substantial crowd on a magnificent fall afternoon. The artists were Emanuel Gruber, one of our state's most consistently reliable cellists, and his ECU colleague, pianist Keiko Sekino. The program embraced works by Debussy, Poulenc, and Franck. The venue was the NCMA's auditorium. The concert was offered on the Sights and Sounds on Sundays series, presented by the Raleigh Chamber Music Guild and the museum. On this occasion, all the ancillary offerings were finely tuned in support of the music. There was a pre-concert, docent-led tour. There were projected illustrations of art works (by Canova, Rodin, Archipenko, Feininger, and Monet). There were informative remarks by the visiting cellist. And richly detailed bios of each artist were included in the program.

Two of the three pieces are likely familiar to even casual concert-goers. Debussy's Sonata for Cello and Piano (1915) is one of the great classics of the period, a work that often figures in mixed cello programs. And Franck's Cello Sonata (c.1886) is a staple of the repertory, too, although it was intended for violin and piano and is as well known in that guise as it is in the edition performed here, prepared by Jules Delsart. (We know that last bit of information thanks to the superb preview of this concert by Meredith-based pianist Kent Lyman, available here.)

The work heard that's not quite so familiar is Poulenc's Sonata for Cello and Piano (1948), an important, four-movement, post-war (that's WWII) contribution to the literature that deserves more exposure. (We could say the same thing of the composer's other music, of course, but as it happens one of his largest scores – Dialogues of the Carmelites – will be given two semi-staged performances in Winston-Salem later this month – for details of which, click here).

At the museum, the playing was consistently magnificent and often breath-taking in terms of tonal beauty and artistic refinement. The artists seemed totally matched in technical proficiency and interpretive intent. The balance of Gruber's 1706 Italian cello (by Salzburg-born David Tecchler, most of whose career was in Rome) with the American Steinway (donated to the museum by Rhône-Poulenc, late of R.T.P. – part of which was established by the composer's grandfather, and all of which was eventually absorbed by Aventis and Bayer) was consistently outstanding.

So the Debussy was communicated with unusual sensitivity in this all Franco-Belgian program, the artists' nuances very nicely projected in the small auditorium. The Poulenc was something of a revelation, particularly for those who recalled some of his choral music or the concerti, many of which pieces bear recognizable musical fingerprints – recurring patterns or motifs – as was the case here. The Franck, too, was full of deep and profound interpretive touches that managed, despite its familiarity, to shed considerable new light on the much-admired, much-loved score. At the end, the heartfelt and warm applause lasted many minutes for the artists and the music they had played.

Note: Sekino returns to Raleigh on November 4 for an election night recital at St. Mary's, where she will partner with departing NCS clarinetist Andrew Lowy and also with cellist Nathaniel Yaffe. For details, click here.