On the Road with Denizens of Deep Musical Trenches 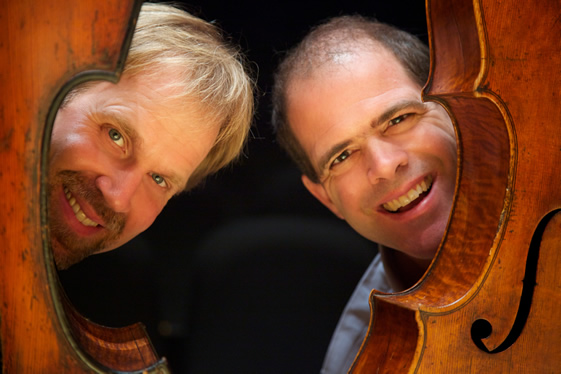 In an effort to present fun classical music to children in an educational way, cellist Brooks Whitehouse and bassist Paul Sharpe gave a concert sponsored by the Mallarmé Chamber Players on Saturday afternoon. They will present a similar but (slightly) more serious concert Sunday. Utilizing the beautiful Kirby Horton Hall, located just outside the Sarah P. Duke Gardens, the duo Low & Lower presented a selection of repertoire from past performances as well as Sunday's scheduled program in front of a group of fidgety-yet-enthralled children as sunlight streamed through the large, all-encompassing windows. Beginning with an entertaining video that led the audience to believe the musicians had awoken late and needed to hitchhike their way to the concert, the players were exuberant and virtuosic but without taking themselves too seriously.

After an "instrument petting zoo" in the lobby, the concert began with an audience participation component, with several of the youngest audience members plucking cello and bass strings to demonstrate the depth of sound we could expect. To start things off, Whitehouse introduced a custom arrangement of J.S. Bach's Cello Suite No. 6, including a courante, sarabande, and gigue. Their performance was sensitive yet energetic, showing off the contrasts of pitch, vibrato, and dynamic expression.

Before the children could get too bored – except for the few who needed to stand and conduct along, which the duo did not seem to mind – Sharpe introduced John Deak's "B.B. Wolf," a piece for bass with spoken word that, in his words, "sticks up for the [Big Bad] Wolf." In addition to dramatic voice acting and singing, Sharpe showcased a variety of interesting bass techniques, including plucking with both hands, tapping and knocking on the wood, sliding vertically with the bow (rather than horizontally, resulting in a screeching sound), stomping, and imitating a wolf howl. The piece claims that the wolf should be treated more like "Man's Best Friend" the dog, rather than "hunted from airplanes."

A short suite followed, with three songs based on winged creatures. First up was a very cleverly arranged mashup of Camille Saint-Saëns' "The Swan" from Carnival of the Animals and Bach's Cello Suite No. 1, which Whitehouse introduced as "The Ugly Bach-ling." The combination of the cello playing its famous arpeggios and the bass' sinuous melody was stunning. Next up was "Song of the Birds," made famous by cellist Pablo Casals and adapted from a Catalan folk song; this segued suddenly into Rimsky-Korsakov's familiar "Flight of the Bumblebee," in which cello and bass alternated melodic material as well as deft chords, harmonies, and accents.

However well-performed these works all were, the highlights of the program were near its end. "Poke: A Bagatelle on Anti-social Media," composed by Lawrence Dillon of the UNC School of the Arts, where Whitehouse and Sharpe also work, has become a signature piece the instrumentalists take on tour. This combination of spoken word, song, and frantically rhythmic playing recreates the frenetic pace of social media and the strange ways that we communicate with each other. Pinging and poking and texting and liking all culminate in a confused impasse between two characters trying to interact with each other in a hilarious disagreement. This piece can be heard again at Sunday's concert.

The penultimate work was Whitehouse and Sharpe's own parody of perhaps the greatest hit from Gilbert & Sullivan's The Pirates of Penzance; their version is "A Modern Music Genius" and the performance included Whitehouse singing (incredibly quickly) silly rhymes about composers, music theory, a few bad viola jokes, and more. Sharpe's backup singing was equally entertaining and their playing was not hindered but seemingly enhanced by simultaneously singing.

As an encore, the duo performed Sharpe's parody of "Baby Got Bouts," playing off the anatomy of the bass and energetically rapping about playing bass instruments. Originally arranged for a talent show, Sharpe's work is based on the ever-popular Sir Mix-a-Lot rap "Baby Got Back," but includes lyrics such as "you get strung" to replace the original lewd subject matter. (Rest assured, the concert stayed family-friendly, but the older members of the audience who know the tune were overjoyed by this addition!)

It is always refreshing to hear a concert given by serious musicians who want to keep their performances of classical music true to the original form: entertainment. These artists let their presentation of it make fun of classical conventions, but their performance was precise and artfully done.

Music played here – and some additional pieces – will be played on the afternoon of Nov. 23. For details, see the sidebar.

P.S. This was the duo's second outing of the weekend, following a performance in Greensboro, for Music for a Great Space, on Nov. 21.