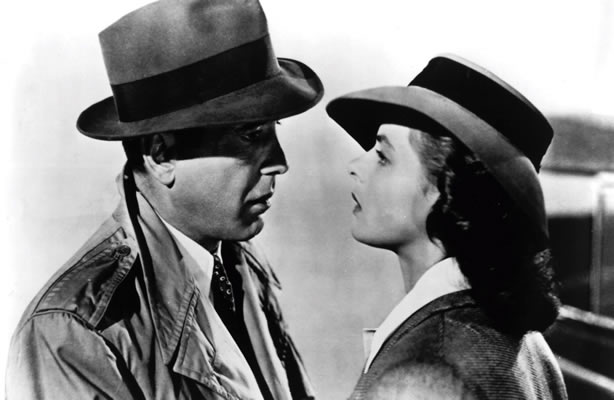 This Valentine’s weekend, three groups of concertgoers packed into Meymandi Concert Hall to hear the North Carolina Symphony play the score along with the 1942 blockbuster Casablanca. Under the baton of Constantine Kitsopoulos, the orchestra brought Max Steiner’s music to life, at times accompanying Dooley Wilson (Sam) and his jazz combo of the Café Américain.

Throngs of chilled audience members wearing red and wielding champagne and roses, celebrated not only their love for one another, but also for director Michael Curtiz’s interpretation of love in times of hardship, and the history of romance between Rick and Ilsa (played by the classic duo of Humphrey Bogart and Ingrid Bergman.) Though not the traditional romance story, the heroic placement of virtue and allegiance above love and desire is another age-old tale appropriate to all generations. The dialogue lends itself well to not only the World War II era, but even to today’s issues. The specific struggle may be different, but we can all find some of Rick or Ilsa in ourselves when needed.

Steiner’s music, featuring countless incarnations of “As Time Goes By,” the lovers’ theme song from their former rendezvous in Paris, and the Marseillaise (known as the French national anthem), is steeped in the Viennese classical tradition. His Austrian heritage just one component of his musical education, Steiner was taught by the legendary Brahms and Mahler, and Richard Strauss, if not a teacher per se, was his godfather! This music is romantic, is stirring,  and is dramatic. Thickly layered harmonies and melodramatic crescendos, along with reprises and variations on the two familiar themes are part of what makes this film so special.

From the beginning of the overture, the music’s effect was palpable. Chaos, rabble, and the throwing together of countless nationalities set the stage for Morocco’s mecca during wartime - Casablanca.

The audio engineer for this concert, Sean Loepp had a difficult task compared to the typical setup for the symphony, as balancing the orchestra’s music with the dialogue and the many loud sounds coming from the recorded soundtrack was an ever-changing battle. At times the dialogue felt booming and loud, drowning out the music - which was the audience’s main interest - while at other times the fast-talking actors’ lines were lost under swelling music. The latter tended to be much more forgiving, as it often happened when supporting characters were speaking and honestly the music was more interesting at these points.

Iconic songs performed by Wilson and his combo, including “It Had to Be You” and “Knock On Wood,” made it feel as if this lovable pianist was sitting center stage with the orchestra and truly made the film come alive. Since music - specifically “As Time Goes By” - is so central to Rick and Ilsa’s romance history, the music had to be perfect, and I’d venture to say it was. When Wilson would cut out, the orchestra would step in to take up the mantle of emotional ambassador, telling us immediately how Rick feels when he first lays eyes on Ilsa in the café. The proud and passionate rendition of the Marseillaise to drown out the singing of the Nazi soldiers was as sweeping as if the orchestra members were all in the café defending their own nationalities.

Because this iconic, larger-than-life film (if we can even still refer to it as a film) has become so legendary, it received the star treatment it so justly deserved with the employment of a fantastic orchestra to bring its classic story to life. Casablanca is in a genre all its own, as “Romance” doesn’t do it justice. Without any spoilers to those unfortunate youngsters who have yet to have experienced the film, I’ll describe it as comedy, tragedy, drama, action, and adventure, with some thriller and mystery shaken in. In short, this is the quintessential film about one complicated relationship!

Playing along with classic films is not new to the NC Symphony. They have performed with The Wizard of Oz, Singin’ in the Rain, West Side Story, and Redes. These concerts have been wildly successful in making classical music more accessible to younger and younger audiences, while also presenting performances of classic films as they were meant to be seen and heard on the Silver Screen. I, for one, love this concept and have truly enjoyed hearing Kitsopoulos and Grant Llwellyn lead the Symphony through these stories.