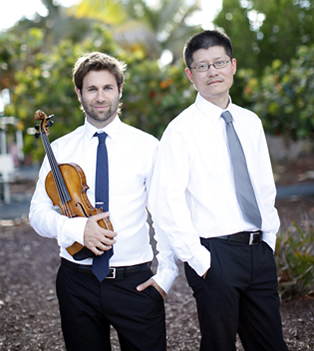 Courtesy the artists and the RCMG

For its local debut, the violin and  piano duo of Tomás Cotik and Tao Lin offered a program consisting of fairly traditional concert music in the first half, capped by dazzling fireworks in the second. The young artists met for a recording project centered on Schubert's six compositions for violin and piano (CD collectors will surely want to hear the resulting pair of Centaur releases); their studio work together continues with a project devoted to Mozart's sonatas.

The recital was presented under the auspices of  the Raleigh Chamber Music Guild in Fletcher Opera Theater, an attractive space built for local performers and presenters that is alas becoming less and less available for its intended clientele, thanks to increasing costs and restricted availability. It would appear that this program will prove to have been the Guild's last there until the fall of 2016, at the earliest.

Weather may have played a role in depressing attendance. There were also competing events next door in Memorial Auditorium (the second of two performances of La Traviata, presented by the North Carolina Opera) and in Meymandi Concert Hall (where painter Herb Jackson,* a Raleigh native, offered remarks before a substantial gathering of Raleigh Fine Arts Society members, prior to the unveiling of its annual North Carolina Artists Exhibition, on view in the Betty Rae McCain gallery through April 23).

Elegance and grace were hallmarks of the first half, which began with Kreisler's arrangement of one of Tartini's little sets of variations on a theme by Corelli. Or maybe it was "in the style" of Tartini, because when it comes to Kreisler, one is never 100% certain. Anyway, the acknowledged master of violin playing in the first half of the 20th century (during a time when there was plenty of competition) wrote oodles of little pieces like this for his own pleasure and to deck out his programs with razzle-dazzle, and this is a very good example. It dazzled here, with Cotik's rich and warm violin sound emanating from his 2000 Mark de Sterke instrument, and Lin's comparably spirited work at the Bösendorfer 280, provided by Ruggero Piano.

There followed a surprisingly Romantic rendition of Mozart's Sonata in G, K/379/373a, which, 'tis said, the little upstart composer had the temerity to dash off in an hour – no laggard was he, although admittedly he may have penned only the violin part at the outset. (There's an account of this under the sub-head "Mozart's Memory" here.)

The big work in the first half was Schubert's Fantasy in C, D.934, that master's largest composition for violin and piano and one that can (and often does) separate sheep from goats in the recital business. Listeners can have had no cause for complaints on this occasion, for this was heard in an elegant and refined rendition that at once shed new light on the score's many beauties and its varied emotional depth as well. For some of us, it's hard to imagine life without Schubert, the composer of pieces of heavenly length (a term often applied to the "Great" C Major Symphony); this was a good example of why that is so.

Part two was altogether lighter. It began with Heifetz's transcription for violin and piano of Gershwin's Three Preludes, which may be heard here in the composer's 1928 British Columbia 78 rpm recording. (This guy was no slouch, but Heifetz elevated these pieces to a whole new level of dazzle, to repeat a word used earlier.)

And then came Piazzolla's oft'-heard Histoire du Tango (arr. Dmitriy Varelas), the component parts of which – "Bordel," "Café," Night-club 1960," and "Concert d'aujourd'hui" ("Modern-Day Concert") – do indeed chart the development of the great Argentinean dance form from its origins in what we once called houses of ill-repute to more proper café settings (for, presumably, more upscale folks) to night clubs and then, totally legitimized, into mid-[20th]-century concert halls. During the splendid playing of the first three numbers there was comparably elegant (and sinuous) dancing from local guest artists Iryna Kadol and Cecil Ho, mainstays of Triangle Tango. Let the record show she danced in high heels while he opted for more conservative footwear, but both survived to make their farewell bows with the musicians!

The presence of these dancers elevated the suite to new levels of dazzle. (There we go again.)

After which, the encore – Piazzolla's "Libertango" (also arr. Valeras) – capped the afternoon with yet more dazzle. (Readers may see and hear this here, from YouTube.)

The RCMG's concert offerings continue with the red-hot Fire Pink Trio at the NCMA on March 15. For details, click here.

*Jackson's own art is on view at Lee Hansley's Glenwood Avenue gallery through April 25; for details, click here,