Intriguing Emotional Music of the Renaissance 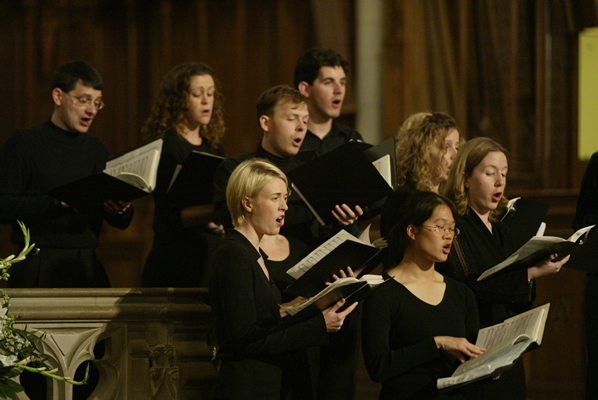 Photo provided by the presenter

When one thinks of music of the Renaissance period, it is usually the devotional music of the church or the lovelorn and often humorous madrigals that come to mind. At that time composers did not have the dynamic markings (f – ff – p – pp. etc.), tempo indicators, and other performance suggestions to underscore the interpretation of strong emotional content. Nevertheless, early music is often imbued with a wide range of emotion. Roman M. Testroet, Director of the Duke Collegium Musicum put together this concert entitled "In Tune with our Feelings – Experiencing Emotion in Early Music" to illustrate this. The program was divided into three headings: Love, Misery, and Joy.

Of course, the text is one major indicator of the emotional content of a piece of music. Other clues are found in the structure, harmony and melodic line. The opening selection, "My Thing is My Own" by Thomas D'Urfey (c.1653-1723), is a verse and chorus structure approaching the topic of love in a humorous and rather bawdy vein. In fact, it sounded much like a vaudeville minstrel song. For example, the first verse reads: "I, a tender young maid, have been courted by many of all sorts and trades, as ever was any. A spruce haberdasher first spake to me fair, but I would have nothing to do with small ware!" Each verse was sung solo by various members of the choir; choruses were sung by the full ensemble.

The next selection was something entirely different. "Io'amo vita mia" (I love you, my life) by Vittoria Alcotti (c.1575-c.1620) is a marvelous polyphonic piece expressing a lover's difficulty in conveying his passionate feeling to his true-love.

Thomas Tallis' (1505-1585) little gem of an anthem, "If Ye Love Me", expresses the love in religious devotion. The passage describing the eternal presence of the Holy Spirit with voice parts in imitative descending scales is pure passion.

Expressions of love ended with guest soloist Erica Dunkle, along with cellist Ken Stewart and harpsichordist Jacqueline Nappi performing "Canzonetta Spirituale sopra alla nanna" by Tarquinio Merula (1595-1665). This gorgeous song of Mary expressing her love of her son, with the knowledge of all that is to come, falls into the same category as Stabat Mater. While the cellist played a passacaglia on two notes, the harpsichord added an improvised obbligato and Dunkle, in her rich mezzo, sang a lullaby of motherly love. Each of the 12 verses ended with a nursery phrase. It was exquisite.

Under the category of Misery (or sorrow), the first selection was "Versa est in luctum" by the great Spanish master, Tomás Luis de Victoria (c.1548-1611). It was published as an added motet with his last work, the 1605 Officium Defunctorum. With text from Job, it expresses deep grief in a rich six-voice setting with some chromaticism and dissonant passing tones.

The Chorale's interpretation of Thomas Tompkins' (1572-1656) classic motet, "When David Heard," expressed David's grief at learning of the death of his son, Absalom. Then "Incipit Lamentatio Jeremiae Prophetae" by Pedro Bermúdez (1558-1605) portrayed the deep grief over Judah's exile.

Dunkle and Testroet, with Nappi accompanying, sang a bridge between Misery and Joy with "Sing unto the Lord" by Orlando Gibbons (1583-1625). The text reads, in part; "Weeping may endure for a night, but joy comes in the morning!"

Who could have experienced more joy that Simenon who had been promised that he would not die before he saw the Messiah? He sat at the gate of the temple when Jesus was brought for dedication. His song begins, "Lord, now lettest thou thy servant depart in peace." One of numerous settings of this text, Tallis' setting captures the mystical joy of the prophet masterfully.

Henry Purcell's (1659-1695) "Come, let us drink" is a three-voice round (or "catch" in Purcell's time) celebrating the joys of imbibing the natural spirits.

The program concluded with "Exultate Deo" by the prince of music, Giovanni Pierluigi da Palestrina. With passages of ascending scales repeated in each voice part, we are invited to "Sing joyfully unto God, our Strength."

It was altogether a very fine concert. There were some intonation problems in a couple of places; ensemble was less than perfect with some shaky entrances especially in polyphonic passages, and a couple of cut-offs that were not as precise as they could be. These were not glaring, but could be improved. It was a good concert with an interesting experimental interactive program that audience members were invited to participate in through smartphone, tablet or laptop.

The next concert by Collegium Musicum will be in the spring and is entitled "Beyond Bawdy: The Dirtiest Music of Medieval and Renaissance Europe." (No rating has been given for this presentation!) Watch for specifics on CVNC's calendar.