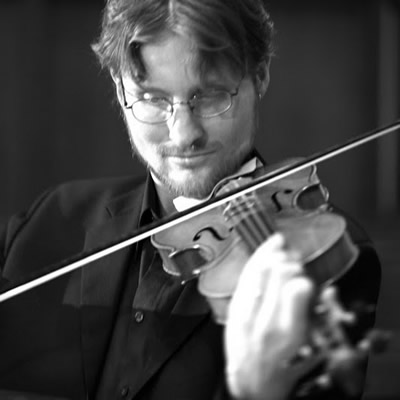 The artistic director of Baroque & Beyond, Beverly Biggs, did some digging around in the archives of Baroque composers of Mediterranean countries for this concert at the lovely gothic Chapel of the Cross in Chapel Hill. What she came up with were eight delightful selections warm with sunshine, charming with Baroque lyricism, and satisfyingly entertaining.

The performing artists of Baroque & Beyond were Robbie Link on viola da gamba, Barbara Blaker Krumdieck on Baroque cello; and Peter Lekx on Baroque violin, with Biggs at the harpsichord.

The concert opened with three recercades for gamba and continuo by the only Spanish composer on the program, Diego Oritz (1510 - c. 1570). He published the first manual on ornamentation for bowed string instruments and a large collection of sacred vocal compositions while in the service of Philip II of Spain. This selection was a rhythmic setting of dance tunes. The continuo included a hand drum played by Lekx, and Link handled the tuneful gamba solo with the mastery for which he is well known.

The Sonata Duodecima for violin, gamba and continuo by Giovanni Batista Fontana featured the duo soloists alternating melodic statements, then weaving their parts together in duet. Very little is known about Fontana. He was born sometime in the 1580s and died in Padova during a plague around 1630. His collection of sonatas for string instruments was published posthumously.

Likewise, little is known of Antonio Pandolfi Mealli. He was born in Tuscany around 1630 and died in Madrid 1669/70. It is rumored that he murdered a castrati in an argument after which he fled to France and later settled in Madrid. Of his works, only two collections of sonatas for violin and harpsichord and a collection of trio sonatas survive. His Sonata, Op. 4, no.1, subtitled "La Bernabea," was in turn; dramatic, quietly impassioned, lively and playful, somber and bold. Lekx sparkled throughout this interesting piece.

Domenico Gabrielli (1651-1690) was not related to the Venice "San Marco Gabriellis" (Giovani and Andrea). He was a cello virtuoso and is recognized as the composer of some of the earliest solo works for this instrument. His Sonata in G for cello and continuo was given a solid and exciting reading by Krumdieck, with Link joining the continuo – a part of the versatility of Baroque & Beyond.

The Ciaccona in C for violin, cello and continuo by Antonio Bertali (1605-1669) is the best known of his compositions which include operas, oratorios, liturgical works and chamber music. The Ciaccona is a charming virtuoso work for violin with ear-catching melodies that really swing, delightful ornaments, and runs of lightning speed. The performance on Saturday was awesome – a virtual show-stopper.

Italian oboist and composer Giovanni Benedetto Platti was born in the late 1690s and died in 1763. His Sonata in D minor, Set 1, No. 2 for cello and continuo has four movements: a rather somber Largo, an energetic Allegro, a serious Adagio and a Fuga marked "a tempo giusto" that picked up a head of steam as it moved along.

Biagio Marini's Arie, madrigali et corenti on Romanesca began with a very nice harpsichord solo introduction. It was a joy to hear Biggs artistry. The solo violin then proceeded with a variety of dances – bright, stately, swinging and airy. Marini, a virtuoso violinist, traveled widely during his lifetime (1594-1663) and his music was influential throughout Europe. He expanded the performance range of the violin by incorporating slurs, double and even triple stopping and employed the first explicitly notated tremolo effects into his music. He is recognized for his inventiveness, lyrical skill, harmonic boldness, and a growing tendency toward common practice tonality.

The one piece on the program that this reviewer has known extensively was Alessandro Stradella's Sinfonia No. 22 in D minor, and this performance spurred me to do some research. Music of the Baroque era has very few performance interpretation indicators. Such elements as tempo, dynamics and phrasing are up for interpretation by the performing artists. We know through historical documents that there are a number of technical details that were interpreted differently in the Baroque era. The performance practice of HIP (historically informed performance) attempts to take this knowledge into account and, of course, to employ historically accurate instruments with their differing timbre.

In today's concert, in spoken informative comments by the artists, much was made of the dramatic elements in today's music, some of it written by composers who lived hot-blooded dramatic lives. I noticed very obvious dramatic elements in the performance of Stradella's sinfonia that I had not heard before in recorded performances with which I am familiar. First, I noticed dynamic and phrasing differences: sforzano attacks, sweeping dramatic crescendos and diminuendos, and sudden dramatic changes in tempo. The performances I am accustomed to are more restrained and sedate with easier transitions between musical episodes.

This is not to say that the performance was unpleasing or to call into question the authenticity of the performance. Surely, instrumental performers in the Baroque era had emotions just as 20th century artists do, and they most certainly experienced much of the music of their time as a moving, dramatic experience, just as we do.

There are some critics who contest the methodology of the HIP movement, contending that its selection of practices and aesthetics are a product of the 20th century and that it is ultimately impossible to know what performances of an earlier time sounded like.

All I can say is that, for this particular piece, I prefer the older, less dramatic performances I have been familiar with for so long. On the other hand I am deeply grateful to Baroque & Beyond for opening my ears to a different reading of this charming masterpiece. And for all the other selections on the program. Their musicianship was outstanding and the program was exquisite.