NC Symphony Brings the Heyday of "The Rat Pack" to Life 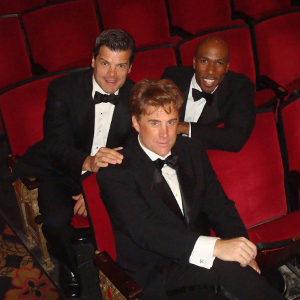 The North Carolina Symphony, along with resident conductor William Henry Curry and esteemed Broadway-veteran vocalists, took the audience back in time to the 1960s, the heyday of "The Rat Pack." The three de facto "leaders" of The Rat Pack – Frank Sinatra, Sammy Davis Jr., and Dean Martin – spent years performing together in sold-out tours as well as acting in movies. These three performers were revived, with their personalities intact, by Sal Viviano, Eric Jordan Young, and Nat Chandler, respectively. This element of characterization added a new level of believability and interest to the concert. The jokes and "banter" in between songs were not entirely essential, but the use of this same characterization during the musical numbers was invaluable. The symphony's orchestrations added new depth and color to familiar classics, creating a grand musical experience altogether.

The concert program alternated between solo or duet selections, and then trio arrangements at the beginning and end of each half of the concert. The Rat Pack trio introduced themselves by singing Bernstein's "New York, New York" (from On the Town), showcasing how strong and energetic their voices were in unison. A highlight of the first half was definitely Viviano's rendition of the Sinatra classics, "Come Fly with Me" and "Fly Me to the Moon." Instead of attempting to simply imitate Sinatra's exact musical style, Viviano sang Sinatra in tandem with his own musical expression, making for a more authentic performance. This was absolutely true of Chandler and Young too. In this Sinatra medley, as well as several other selections, the brass section of the NCS especially shone, in the style of a brass jazz ensemble.

Chandler, as Dean Martin, sang "That's Amore," the classic romantic waltz. A small amount of audience interaction occurred here, with Chandler humorously encouraging front-row audience members to sing short phrases of the song into the microphone. During Young's version of "Once in a Lifetime," he established himself as a spontaneous and flamboyant performer, and because of this, all of his performances were absolutely engaging. Young's expression sometimes seemed a little over the top, but in a good way, since his style complimented the musical personalities of the other two singers. In the second half of the concert, Young sang a medley of "Old Black Magic," "Candy Man," and "Birth of the Blues" – three seemingly different songs that were united by his energetic delivery.

Viviano and Chandler's charming duet of "Anything You Can Do I Can Do Better" was a hit, especially since it occurred in the second half, after their characters had been more developed for the audience. To close the concert, the trio sang the incredibly powerful ballad "My Way." The unique orchestration for this piece was notable, with creative countermelodies that contributed to a lush texture. This had been demonstrated many times earlier in the concert as well, but throughout "My Way," the string countermelodies were especially beautiful. For the concert's necessary encore, the three sang "New York, New York" – the version popularized by Sinatra. This was a clever ending with an audience favorite that made the concert a truly unified performance.