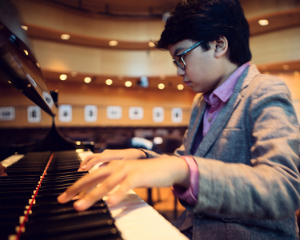 Threats of potential thunderstorms did not keep the North Carolina Symphony from performing a memorable Summerfest concert at Koka Booth Amphitheatre. Conductor David Glover and the Symphony welcomed the remarkable pianist Joey Alexander, as well as bassist Dan Chmielinski and drummer Kyle Poole. The three young musicians together performed as the Joey Alexander Trio. Even if Alexander wasn't only 12 years old (he was the youngest ever Grammy nominee in the jazz category this year), his virtuosity and talent would be no less noteworthy – Alexander plays with passion and musical sensibility that are well beyond his years. The fact that he is 12, and that his fellow trio members are both in their early 20s, made this performance even more special.

Joey Alexander's performance was bookended by symphonic selections that set the mood. First was the Overture from Gershwin's musical Girl Crazy, which contains the ever-popular tune "I Got Rhythm." Robert McBride's playful arrangement introduced the concert that was to come while the sun was going down. Several of Alexander's original compositions, arranged for orchestra by Constantine Kitsopoulos, rounded out the first half. In the energetic "City Lights," the trio took center stage with supportive countermelodies from the orchestra. Immediately, Alexander's natural, easy talent was obvious in the way he played and interacted with Chmielinski, Poole, and Glover. "Sunday Waltz" began with a flurry of restless notes from the piano, then eased into a slower, more ballad-like theme. Sweeping melodies from the strings supported this melody and its variations. A notable bass solo in the middle featured snappy and lilting rhythms that contrasted more meandering textures. The arrangement of Thelonious Monk's "Criss Cross" supported a punctuated, energetic texture – a continuous accented beat created movement that supported the fiery trio.

To begin the second half of the concert, Alexander came onstage alone to perform Gershwin's "I Loves You, Porgy," a ballad that shifted between quietly meditative and passionately stormy. Alexander's performances of both this piece and the others brought to mind the differences between jazz and more traditional, classical music: he exemplifies the visceral emotion and spontaneity that is necessary for any jazz performance. Chmielinski and Poole joined for the next selection, the classic "Summertime" by Gershwin. After a unique introduction, the familiar melody was played on the double bass with the bow, which brought an unusual texture for a jazz trio but that worked quite well to introduce the romantic melody. The music created by the trio eventually moved away from familiarity to introduce new variations and moods, before returning back to the theme. This piece definitely seemed to be a highlight of the concert's second half.

Following much applause for the Joey Alexander Trio and several curtain calls, the Symphony returned to the stage to perform the dreamy "American in Paris" by George Gershwin. The atmosphere created in the amphitheater by this symphonic poem was striking – its sweeping, sultry melodies and catchy rhythms were perfect for a summer night. Far-off lightning (but no rain!) may have made some audience members nervous, but the flashes actually seemed to complete the ambience created by the music; the rain held off with plenty of time for the grand and lush ending of this piece.

Joey Alexander's Grammy nominated debut album, My Favorite Things is available on both iTunes and amazon.com.