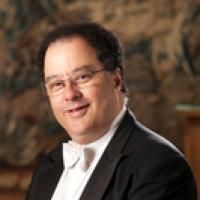 This preview has been provided by the Duke University Music Department.

The Duke Symphony Orchestra, Harry Davidson, music director, opens their fall season with Berlioz and the Bard on Wednesday, October 5 at 8 pm in Baldwin Auditorium. The concert features sopranos Caroline Bergan and Coraine Tate and members of the Antic Shakespeare Company, directed by Jay O'Berski. Harry Davidson conducts the orchestra.

This concert is the first in the Duke Symphony Orchestra's season of Musical Shakespeare, in celebration of the greatest writer's inspiration in the realm of music during the year of the 400th anniversary of his death.

The Antic Shakespeare Company will present a scene from the relevant Shakespeare play before each of the Berlioz pieces.

Coraine Tate (soprano), a native of Columbus, Georgia, is in her second year of the Artist Diploma program at the Cleveland Institute of Music, studying with Mary Schiller. Tate's numerous concert appearances include the Oregon Bach Festival and Songfest at the Colburn School in Los Angeles. She received national attention for her solo performance at the Trondheim Nidaros Cathedral of This Little Light of Mine in the PBS Special: Christmas in Norway with the St. Olaf Choir. Most recently, she participated in The Conservatory Project recital series at the John F. Kennedy Center for the Performing Arts.

The Antic Shakespeare Company at Duke University, directed by Jay O'Berski, is dedicated to bringing together actors, directors, designers, and dramaturges of all backgrounds and academic majors to foster an interest in the playwright's works, within the Duke community and beyond.