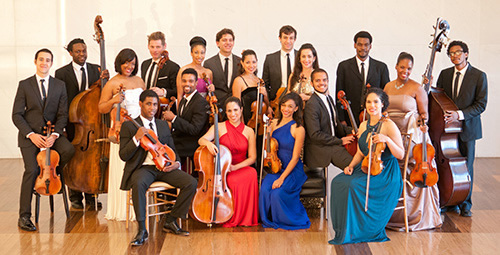 
Diversity is at the center of the Sphinx Virtuosi Chamber
Orchestra's mission.

Chamber Music Raleigh (originally Raleigh Chamber Music Guild) has been a critical institution bringing the best in chamber music to our area for over seventy years. The usual format has been to have two series: Sights and Sounds, featuring (reasonably) local musicians and held at the NC Museum of Art, and the Master's Series, bringing in world-class chamber groups and soloists from across the country and beyond.

This year, facing budgetary constraints, the Master's Series contracted to this one visit by the Sphinx Virtuosi, and was to be held on Sunday October 9 at Hayes Barton United Methodist Church. However, Hurricane Matthew caused a power outage at the church, and as concerts are no longer given by candlelight (although the thought is an attractive one), it had to be cancelled.

Thankfully, there remained a free concert scheduled for Monday October 10 at Saint Ambrose Episcopal Church. Please note that the ticketed concert on Sunday was to be an important financial boost to Chamber Music Raleigh; it would be most fitting for readers to consider a contribution to help out in this difficult time.

Saint Ambrose, which is an African-American church, was a fitting venue for the Sphinx Virtuosi. The group forms each fall as 18 of the alumni of the Sphinx Competition. This contest is held in Detroit, and is open to Black and Latino students who are Classical string players. This is quite a serious competition, with a first prize of $50,000 and solo appearances with major orchestras, with additional prize money for runners-up. The prize has the goal of recognizing Classical music talent in the Black and Latino communities, which are severely underrepresented in the field.

The core of the Sphinx Virtuosi is the Catalyst Quartet; these four players serve as section leaders to the full ensemble, which has four each of violins I and II, violas, and cellos, with two double basses. Some of the performers are still in training at various conservatories and universities, while others have started their careers. All are still quite young, and this is very much in evidence in the vigor they show on stage. The Virtuosi bring their concerts to venues where they can reach minority audiences who might not otherwise see much to identify with in the European-East Asian dominated Classical music scene. That was certainly the case in this concert.

The program was somewhat shorter than the Sunday concert would have been, coming in at about an hour, with seven brief selections. The full ensemble performed only in the first two and in the finale. All the composers were Latino – Astor Piazzola, Javier Álvarez, Cesar Espejo, Heitor Villa-Lobos, Osvaldo Golijov, and Alberto Ginastera.

The first work was "Libertango" by Piazzola, arranged by Thomas Kalb for the full ensemble. This was an enthusiastic opener, especially shown by the first bassist who really had a dazzling technique to display.

The second piece was "Metro Chabacano" by Alvarez, a Mexican composer who used more involved rhythms than in the opening tango. There certainly were whiffs of urban sophistication here to contrast with the Argentinian dance it followed.

Third was a solo violin work, "Prelude Iberique," by the Spanish composer Cesar Espejo. This was a bravura performance by Hannah White, a stunning young violinist who has won a drawer full of awards, and plays a Stradivarius on loan from the Rachel Barton Pine Foundation. The composition was designed to be a showcase for technique, and not a profound exploration of spirituality or whatnot. However, it showed what this brilliant musician can do to good effect. I'm sure we will be hearing much more from White over the next few decades.

After three up-tempo and high-volume selections, there was the one lyrical piece on the program; Bachianas Brasileiras no. 5, "Aria," a work familiar to many from its frequent performances, broadcasts, and use in movies and so forth. This was an arrangement by the Catalyst Quartet for string quartet. They played it well, but I'm sure many ears were more accustomed to the lush sounds from a full string orchestra, backing up whatever solo instrument or singer that arrangement called for. (One is an an excellent version for musical saw and string trio.) This transitioned without break into the very lively "La muerte del Angel" by Piazzolla, again arranged by the Catalyst Quartet, which included a whistle and some very active playing.

Sixth on the program was "Last Round for Two String Quartets and Double Bass" by Golijov. This was the most contemporary in style of the pieces on this concert, highly dissonant, fast, and aggressive.

To round out the evening, we had "Finale Furioso" from Concerto per corde, Op. 33, by Ginastera. As reflected in the title, this was decidedly up-tempo and designed to send things off on a high note. This was with the full ensemble.

All in all, it was an enjoyable if relatively short concert given to a receptive and grateful audience. Let's hope there is more of this kind of thing in the future. But above all, let us make sure and support Chamber Music Raleigh right now.