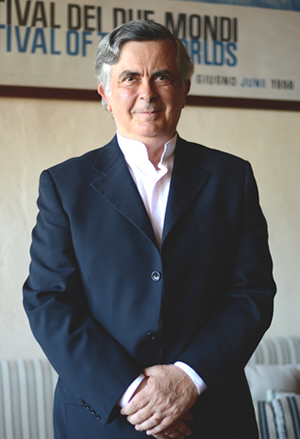 Lorenzo Muti led the Chamber Orchestra of the Triangle in a very timely concert – two chamber symphonies by Soviet composer Dimitri Shostakovich (1906-75) – or rather, two works originally for string quartet, arranged for orchestra by Rudolf Barshai (1924-2010), who directed the Moscow Chamber Orchestra from 1955 to 1977. This is an unusual program for COT who generally plays older repertoire, so it was refreshing to hear something closer to our time.* (This reviewer is hoping that a living composer can be featured someday.*) It is only reasonable to program a concert of one composer when the music includes a wide selection of variation in mood, texture, tempo, and so forth. That is certainly true with each of the two symphonies, as they are very different works with contrasting sections. The result was an enjoyable and impressive afternoon's concert.

And why did I start this little essay saying that the concert was timely? We have just had a traumatic election, where there is serious doubt afoot as to an authoritarian drift in our government, occupied at the very top by people quite fond of the Russian style. In an Orwellian era where there is a growing indifference to whether public statements are literally true or not, we can find solace in the work of Shostakovich, who adapted to conditions far worse than most of us can imagine for most of his life.

The first work was Chamber Symphony, Op. 73a, an arrangement of String Quartet No. 3, written in 1946. This is a very long work, about 45 minutes, in five movements, and was the only piece Shostakovich wrote in all of 1946. It was arranged for flute, oboe, English horn, clarinet, bassoon, harp, and strings. The demands on the string players were considerable, as chamber music of this type is generally more difficult than most orchestral repertoire. Barshai showed great skill in treating the quartet with subtle use of the winds, and providing significant solos for the section leaders in the strings. This allowed for sufficient variation in texture to sustain interest and accentuate the flow of the music.

The first movement started out with a familiar jovial, perhaps sarcastic, jaunty tune, of which Shostakovich has a large supply. The second features violas with a repeated figure against which the other instruments entwine their counterpoint. This technique features throughout the rest of the piece from time to time. The remainder of the work alternates between grave and uplifting moods, with a soft fade out for an ending.

After intermission, there was the very different Chamber Symphony, Op. 110a, arranged from String Quartet No. 8, one of the more frequently performed of his quartets. (This may be because it is far shorter, fitting for music written in only three days.) Shostakovich was in Dresden in 1960, working on a film score commemorating the firebombing of February 1945, when he took time out for this composition. Barshai's version is for string orchestra only, which worked well.

One way this could be written so fast is through using quotes from previous pieces, as well as reference to Shostakovich's musical signature, D-S-C-H. This translates via the German note names to D, E-flat, C, B. This forms the opening of the first movement, treated contrapuntally; the movement ends with quotes from his Symphonies No. 1 and 5. The second movement quotes his Second Piano Trio, while the third is a waltz on the D-S-C-H theme. The third movement also includes a prominent quote from his first cello concerto, written in 1959. The work ends with the unusual pairing of two consecutive Largo movements, the first of which quotes from his opera Lady Macbeth of the Mtsensk District. The final movement opens with a Stalinesque "knock at the door," then has an intense, slow fugue, with a very soft slow ending.

The concert was well attended and appreciated by the audience in the cozy embrace of Durham's Carolina Theatre. The Chamber Orchestra of the Triangle is a valuable contributor to the richness of our cultural life in this area. Let us encourage generous support by those who appreciate their good work.

*For a letter to the editor concerning this review that provides additional information about COT's advocacy on behalf of new music, click here.