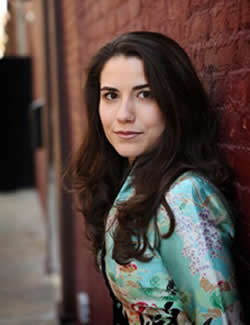 Grant Llewellyn teamed up with soprano Joélle Harvey, pianist Clara Yang, and the North Carolina Symphony for an unusual and very interesting commemoration of Mozart's birthday. Mozart wrote quite a number of concert arias for voice and orchestra, which are infrequently programmed as they do not fit the usual format of modern orchestral concerts. It is significantly more convenient, and appropriate, to have a program with several songs combined, as we had this evening. Llewellyn found a superb choice in Harvey, who has both the pipes to fill Meymandi to the back of the hall, and the endurance to sing five arias, some quite demanding. And as one of the works is for soprano and piano, it was practical to have the pianist play a short Mozart selection for piano and orchestra.

The evening started with the Overture to The Abduction from the Seraglio, K. 384, in a vigorous and enthusiastic rendition. This was handy for the percussionists, other than the timpanist, as this short piece evokes the exotic flavor of Turkish environs with some action in the back of the orchestra for them. Once done, they took off for the evening, as small forces ruled from then on. This was the evening's only use of the piccolo, playing a part originally intended for a recorder. This opera premiered in 1782 and is quite a lot of fun. One rather wishes they termed it "harem" instead of "seraglio," which would probably help the box office, although it's not quite the correct term. Given how little Westerners know of the mysterious Near East, the music retains its spicy and exotic character, along with other pieces like the Violin Concerto, No. 5.

Next, Harvey sang "Basta, vincesti…Ah, non lasciarmi" ("Enough, you have won…Oh, don't leave me") K. 295a [486a] – a recitative and aria, free-standing and not part of a Mozart opera – based on an excerpt from a libretto by the prolific Pietro Metastasio. The subject is the oft-portrayed dramatic suicide of Queen Dido of Carthage, after her man Aeneas sails off for greener pastures to the north with his pack of Trojans. (Listeners will remember Purcell's aria of the same scene.) It was rapidly apparent that this evening was going to be graced by some superb singing. The contrast in mood from the opening music was stark and effective; to paraphrase what one of the soldiers said in Saving Private Ryan about Edith Piaf, a few more songs like that and we'd be stabbing ourselves.

After this, stagehands wheeled out the Steinway grand, and then for some reason the orchestra sat quietly waiting for the soloists for quite some time. During unintended pauses like this, speculation as to what's up backstage is inevitable, especially with two soloists. (Will one emerge with a black eye?) Perhaps they noticed that the program did not list the pianist for this number. After some time, Llewellyn appeared with Harvey and Yang for the recitative and aria "Ch'io mi scordi di te?...Non temer, amato bene," ("You ask that I forgive you?...Fear nothing, my beloved") K. 505. Mozart had used this text before in Idomeneo, but recycled it for this concert aria as a gift in a farewell concert for Anna Selina Storace, including a piano part for himself. Yang proved a very sensitive and expressive pianist, well-suited to this role in a work that displays a wide range of emotions. Thankfully, it was not only romantically-inspired suicide propelling the action, although it did touch on that common operatic theme.

With the piano there on stage, why not be treated to a little piano and orchestra, while the soprano rests her larynx? Yang and the orchestra gave us Concert Rondo in A, K. 386, a delightful ten-minute work that very nearly was lost to the world. The manuscript was sold page-by-page in 1840, and only fully reassembled in the 1990s, with only a few extrapolations required. The result was a real gem, and showed Yang's considerable skill and mastery of the instrument. It is quite fine to have her as a local resident; she teaches at UNC-Chapel Hill, and is a favorite of area music lovers.

After intermission, Harvey returned for the well-known and well-loved Exsultate, jubilate, K. 165. Mozart dashed this off at age 17, already an old hand at writing virtuoso showpieces for castrati, of which this is a prime example. The audience responded with a standing ovation and was clearly most impressed. This was followed by the very short "Un moto di gioia" ("My heart is filled with joy"), K. 579. This was a substitute aria to be used for Susanna in The Marriage of Figaro during the transvestite scene with Cherubino, where the woman singing the male role is dressed as a woman to fake out the jealous Count. (Perhaps we could use this to campaign against HB2?) It didn't stick in the opera, but lives on as a concert aria.

Rounding out the evening was the masterful Symphony No. 39 in E-flat, K. 543. The orchestra has an unusual sound due to having no oboes, with two clarinets instead. This dramatic and profound work is – well, as the saying goes, you can only praise Homer so much. This evening's rendition was clear and well-articulated, with a daringly fast last movement showing off the violins in a rather mad dash.

All in all, a most fitting and enjoyable birthday party for the prematurely departed master.

This performance repeats 1/28 at Meymandi Concert Hall and 1/29 in Chapel Hill. See our sidebar for details.