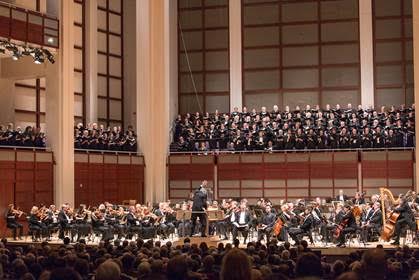 Meymandi Concert Hall was packed for Friday's concert, all the way up to the nosebleed seats near the rafters – and for good reason. Beethoven's Ninth, for all of its status as an iconic classical music standard, is the least performed of his symphonies, except in Japan, and this was a chance to see it in person. The effort required the services of both the NC Symphony under Grant Llewellyn, and the North Carolina Master Chorale led by Al Sturgis.

To lead into the big work, Llewellyn took it easy on the winds and brass in the first half of the program by performing Richard Strauss' Metamporphosen: A Study for 23 Solo Strings. This unusual work is a complimentary piece to the recent performance of Benjamin Britten's War Requiem, which was linked to the bombing of Coventry Cathedral by the Luftwaffe. In the case of Strauss, he was living under virtual house arrest in Bavaria, with his music banned by the Nazis. He observed with horror the destruction of the many concert halls where he had performed for many decades, and at age 80 he was in frail condition. In 1944, Swiss conductor Paul Sacher commissioned a string orchestra piece to be performed in the relative safety of Zurich. As Strauss was broke, this was welcome news. The result was an experiment in orchestration and texture, with mixed results.

A little background: string orchestra sections, even when playing on their own without winds, brass, and percussion, are conventionally divided into five parts – first and second violins, violas, cellos, and double basses. There are many variations on this pattern in string orchestra compositions, and in any orchestral work there are times when sections are divided into multiple parts. However, this must be done with caution, as the facts of acoustics mean that too many string voices results in a muddy, indistinct sound, and a sameness of texture that becomes tedious. Here, Llewellyn did his best to bring out the voices and individual lines, and the musicians did a marvelous job; regardless, the physics of sound cut against them. It was very difficult to follow the melodies and counterpoint, lost in the mush of so many similar-sounding instruments. It did not help that the hall is not a chamber music emporium, and as such the audience was bathed in a wash of relatively undifferentiated sound. As the piece was quite long for its type, and in one movement, the net effect was not the best. The audience gave a polite if brief applause before heading for the intermission break.

The dear reader is no doubt familiar with Beethoven's Ninth, so I will not belabor the point with recounting its genesis, first performance, spread over the world, and so forth. Much good information is covered by the recent movie Following the Ninth: In the Footsteps of Beethoven's Final Symphony, which I highly recommend. The NC Symphony and Master Chorale certainly had their hands full, and the results were commendable.

The first movement crept in from an inaudibly soft beginning, to a fortissimo that still, after so many hearings, gets the pulse to have a start. The orchestra's articulation and enthusiasm were much in evidence, as everyone involved was clearly set to burn some calories this evening. (None too easy for the 23 strings fresh from the Strauss!) Unlike the Strauss, Beethoven is not afraid of unison passages, which have strategic and important places in the whole piece, and especially in this first movement. Llewellyn and crew pulled off the big dramatic climaxes in good form. There was not a great deal of bending of the tempo – some, but not huge, in the manner of some other conductors.

The second movement will remind those of us old enough to remember of the NBC Nightly News of the '60s. The timpanist had a field day with this one; he was quite restrained when he didn't have the solo, to give others a chance, but gave the drums quite the whack when he was given the main idea. The strings were crisp and the entire ensemble stuck together quite well.

After all this revolutionary tumult and storming heaven, it was time for some reflection in the slow third movement. Just before the start, the four soloists came out to sit in front of the orchestra, so that there would be no break between the third and final movements. The star of this show was hornist Rachel Niketopoulos, who was charged with pulling off the abnormally prominent fourth horn part, notorious among brass players. Why the composer singled out the fourth horn for this, who knows, although there has been ink spilled about it (see here and here). The clarinets also have notable passages that were very well done this evening.

Finally, time for the climax of the evening – the big, loud, strange, and ubiquitous choral finale. After all the movies and the European Union anthem and arrangements and hymnals and jingles and figure skating and whatnot, the big "Ode to Joy" theme can get old on the ears; the challenge in any performance is to pull it off with freshness and enthusiasm, which was certainly the case here. First the chaos and terror of the opening, then the tour through the first three movements, then the chance for the cellos and double basses to shine with an operatic recitative and then solo theme. The double basses in particular are fun to watch in this final movement, as later in the score they have what can only be called borderline impossible notes, flying all over the place. Although everyone else, chorus and orchestra, is fortissimo at that time, at least it looked like the basses were hitting the notes, certainly a formidable feat.

The first singer out of the gate was the baritone soloist, Reginald Smith Jr., an imposing presence (as all the quartet were), and a superior vocalist to be sure. After his bit with the Master Chorale added to the mix, he was joined by soprano Rebecca Evans, mezzo-soprano Paula Murrihy, and tenor Anthony Dean Griffey. All certainly had pipes, and filled the hall to the last seat.

There were a few items that I would have done a touch differently – being a critic and all – one being the oddball comic entrance of the Turkish march. (I used to duplicate the sound of this by banging on the marble stall dividers in the dorm at the University of North Texas.) Llewellyn took this entrance very softly, but I think it should be done to stronger effect and without reservation. It's a goofy moment that needs goofy treatment. Close, but not quite this time.

The conclusion was splendidly done with all the volume the symphony and chorus could muster, and the audience reacted with an instant and prolonged standing ovation. Well deserved all around.