Will Ransom, the artistic director of the Highlands Cashiers Chamber Music Festival, has worked his magic once again to bring a roster of stellar chamber musicians to its 36th season. With two weeks yet to go, the festival is still in full swing with full-length concerts and related events to suit many tastes. This concert at the Albert Carlton Library, entitled "Czech Please," was brilliantly programmed to include the sunny and ebullient String Quintet in E-flat, Op. 97 ("American") by Antonín Dvořák, the elegiac Piano Trio in G minor, Op. 15 by Bedřich Smetana, and the arrestingly eclectic Three Madrigals for Violin and Viola, H. 313 by Bohuslav Martinů. The performers were William and Alexandra Preucil, violins; Yinzi Kong and Aloysia Friedmann, violas; Andrew Yee, cello, and Ransom on piano. The event was underwritten by Gay Graves and Boyd Letcher.

The program opened with the Martinů duets from 1949, performed by Alexandra Preucil and Kong. Inspired by Mozart's duos, as well as English madrigals, each movement is infused with rhythmic intricacies, flexible declamations, and an ever-changing polyphonic or chordal texture. Musically light on their feet, Preucil and Kong were completely immersed in this playful cat-and-mouse game and tossed off the intricate writing without it sounding worked. Their exquisite musicianship, which matched mood, phrasing, and intonation, brought a resounding ovation from the audience.

Just before intermission came the Smetana Trio, performed by William Preucil, Yee, and Ransom. This was Smetana's only piano trio and was composed in 1855 after his beloved four-year old daughter Bedriška had died from scarlet fever. In her short life, she had displayed some musical talent, and the bereaved father dedicated the trio to her. The challenging piano part which shows the influence of Schumann and Liszt was played by Smetana at the work's premiere.

Knowing the genesis of this elegiac piece made it a bit difficult to listen to. Yee remarked that he felt a bit uncomfortable with how much fun they were having playing it. And, one might marvel that such a tragic event could unleash such an outpouring of beautiful music, instead of silencing the composer altogether. Preucil's impassioned solo at the beginning set a mournful tone with its series of descending half-steps comprising a classical lament gesture. Yee had to be experienced on two levels, with his large physical gestures running a counterpart to the sounds he generated. Ransom, though charged with a difficult part, anchored the ensemble rather quietly from the keyboard. The scherzo-like initial feel of the second movement provided some relief from the first movement's intensity and afforded some gorgeous solos from each of the strings. But the funereal rumblings were neither completely absent here, nor in the rousing closing movement, which slowed into an especially slow and expansive dark passage before ending in the parallel major key. The artists played their hearts out and won the audience's standing ovation.

After intermission, violist Friedmann joined the string group and introduced the Dvořák String Quintet. The work was written between June 26 and August 1, 1893 while he was living in the Czech settlement at Spillville, Iowa. The first performance was given in New York City on January 12, 1894. This quintet was the perfect foil to the anguish-ridden Smetana Trio we'd just heard. Its moniker "American" was said by annotator Philip Huscher to refer as much to its general manner – "openhearted, untroubled, straightforward, unlearned in the best sense of the word" – as anything else. The ensemble dug into this work with a hearty enthusiasm, so much so that at times they overpowered the acoustics of the relatively small performance space. Each of the four movements was given expansive treatment with the consummate musicianship one would expect from such an august ensemble. The third movement Larghetto was a particular highlight with gorgeous solos from both the violas and cello, with the joyous Finale played with sheer abandon. Again, the audience rose in ovation in tribute to this magnificent performance.

As the Highlands Cashiers Chamber Music Festival continues, visit our calendar for what is in store through August 6. 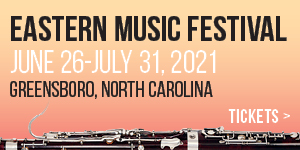