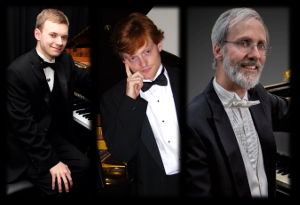 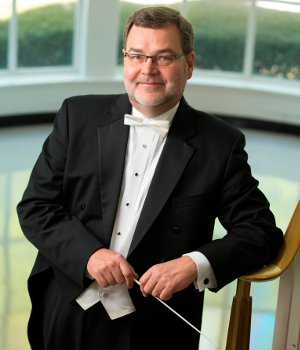 Asheville's intimate 500-seat Diana Wortham Theatre was the site of a benefit concert by the Music Foundation of Western North Carolina, with proceeds going to support the Hendersonville Symphony Orchestra. The soloists were pianists Jesse Davis, Christopher Tavernier and Vance Reese. Thomas Joiner, Music Director of the Hendersonville Symphony Orchestra conducted a twenty-member string orchestra drawn from the HSO.

The theme was "the three B's" – Bach, Beethoven and Brahms. The four selections were presented in a sequence of Brahms, Bach, Beethoven and Bach. This review will discuss the music in a different order, starting with the evening's featured works – the two concerti that Johann Sebastian Bach wrote for three harpsichords and small orchestra. Bach almost certainly wrote these works to be performed with his eldest son, W. Friedemann Bach, and his most talented son, Carl Philipp Emanuel Bach. It is likely that J.S. Bach would have been enthusiastic about the power of the modern pianoforte and would have applauded the three matched Perzina grand pianos used in this concert.

Concerto No. 1 in D minor for Three Pianos, BWV 1063 is a three-movement work (fast, slow, fast). Bach had sensibly moved beyond the usual Baroque pattern (four movements – slow, fast, slow, fast) and wrote in a pattern that became normal for concertos throughout the classical period that followed. The audience was treated to remarkable clarity and excellent rapport among the soloists in the first movement, and then long quiet passages (often just pianos and low strings) in the slow movement "Alla Siciliana." The exciting third movement featured fast clean runs, something harder to achieve on a piano than on a harpsichord. While Davis was clearly the lead soloist, each of the three pianists had fine solo passages, and the three meshed very well.

Concerto No. 2 in C for Three Pianos, BWV 1064 was the final work on the program. Again, the first and third movements are Allegros but the middle movement is a classic Adagio. Some intricate polyphony occurs in that movement, and the three pianists made the details clear with their voicing. The final movement of this concerto at times resembles Bach's Brandenburg Concerto #5, particularly in the solo piano cadenza ably played by Davis.

The only disappointment in the two Bach works was the accompanying orchestra, which had at times a thin sound in the violins, particularly in the first movement of Concerto No. 2. That same problem was more pronounced in the opening work of the evening, when the string orchestra – no pianos this time – played Johannes Brahms's "Sixteen Waltzes," Op. 39, a suite originally for solo piano and arranged for strings by Ferdinand Thieriot. The orchestra did not give us the varying moods that Brahms had written into his sixteen waltzes. There are several rapid and happy waltzes, one that is definitely doloroso, and two where the composer lets loose his Hungarian ancestry. The string timbre in this performance was the same for all of these. The musicians were "playing notes" rather than feeling Brahms' romanticism.

Following intermission, Tavernier performed Beethoven's Piano Sonata No. 21 in C, Op. 53, known as the "Waldstein." Tavernier is a seventeen-year-old pianist with great technical ability who has a quiet devotion to excellence and shows constant movement towards being a complete musician. When he was quite young, his strength lay in the romantic repertoire. More recently, he has given fine performances of twentieth-century works, notably Prokofiev's Piano Concerto No. 3. A year ago, I reviewed him in the first movement of the Waldstein: "Beethoven deals with emotional subjects such as heroism, fate, tragedy, and the affirmation of life despite its woes. This is heavy stuff for a sixteen-year-old... Tavernier has many years ahead of him to develop his approach to Beethoven." I am pleased to report that he is making progress on that project. He played the Allegro con brio just a bit slower than a year ago, giving him time to highlight dynamic contrasts and explore emotions. (Once he has settled on his interpretation, he can speed it up again.) During the Adagio molto the audience fell totally silent, enchanted by his evocative voicing. Tavernier's third movement is still a work in progress. There was a mild memory lapse and too much loud pedal, but one could sense the pianist seeking to find a rapport between his soul and Beethoven's. Beethoven is not easy, and there is no right way. Each concert pianist finds his own slightly different approach. Tavernier's will come in time.