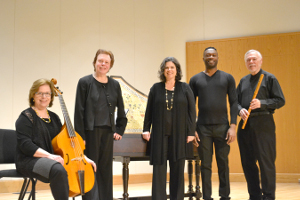 Carolina Pro Musica is a group of four musicians who have been providing early music (pre-1800) to Charlotte and environs for forty years. They perform in local churches and have toured through the Southeast, Boston, and Europe. The core group adds guest artists as needed. This evening we were treated to a program of religious music by J. S. Bach, plus one work by Telemann.

The concert was held in the Sharon Presbyterian Chapel in Charlotte, a charming church in a decidedly upscale part of town. Concerts like this require the smallest venue possible appropriate for the anticipated audience because the instruments are particularly softer than modern ones. I highly advise sitting up close, as I did. Even those with good hearing will miss a lot if they are in the back of the hall. Thankfully, Hurricane Irma was not an issue, the weather was fine, and the concert was well-attended.

The first piece was the Sinfonia from Bach's cantata Wir danken dir, Gott (BWV 29), for oboe, Baroque violin, and continuo. For this concert, the continuo was either organ or harpsichord, viola da gamba, and double bass. In this work, they used the organ, which is a small portable instrument; this was the featured part in the original orchestration of this movement which did not have singers. However, for this performance, Ferrell arranged it for the present instrumentation, stressing the recorder part. This was quite a challenge to play since the sinfonia is derived from the Preludio of the Third Partita for Solo Violin. The melody, and almost the whole of the original sonata movement, is a perpetuum mobile exercise of all sixteenth notes with nary a break for a breath. Also, and even more challenging, is that the up-tempo melody takes full advantage of the strings and the tuning of a violin, with frequent jumps between each note that are designed for a bow, and murder on a recorder. After a bit of a rough start, Ferrell took charge and pulled it off, with some assistance from the oboe as needed.

The second number was a duet from Bach's cantata Wachet auf (BWV 140), "Mein Freund ist mein" for soprano and bass, oboe, and continuo. This is one of Bach's most popular cantatas. I brought a friend along to the concert; he had warned me that he might just doze off from time to time, as he finds Classical music relaxing. That was indeed the case, even so early in the evening, and despite the title of the work. And yes, I gave him a hard time about it. The performance was superb.

This was followed by Bach's Well-Tempered Klavier Book II, Praeludium II, on harpsichord performed by Hite Jacob. She used a relatively small instrument, with a very soft sound. I have become accustomed to larger, louder harpsichords, and found this one required a lot of concentration to follow. As you know, there are many sounds coming out of a harpsichord that don't relate to the pitch at all, and a very soft instrument can hide the tune among all the clicks and clacks. A close listen was rewarding.

Next was the only non-Bach musical offering, Georg Phillip Telemann's Concerto in A minor (TWV 43: a3) which is oddly named, as it is for recorder, oboe, violin, and continuo – nary an orchestra in sight. In this continuo, they used harpsichord instead of the organ. This was a four-movement work, quite pleasant as most Telemann is. The final Vivace featured some impressive arpeggiation by violinist Willet.

This was followed by another harpsichord solo from the Well-Tempered Klavier Book II, Praeludium XII.

The final treat was the entire Bach cantata Tritt auf die Glaubensbahn, BVW 152 (Step on the Path of Faith), which gave the program its name. This was scored for soprano, bass, recorder, oboe, viola d'amore, and continuo (here with organ). The big star of this piece was the viola d'amore, an original 1777 instrument with seven main strings and seven sympathetic strings, played by Willet. It's a rare treat to hear (and see) this instrument, of a type which I rather wish had survived to modern times. The singers were strong throughout the concert, and this was no exception. Bach had an admirable habit of having Jesus portrayed by basses, and DuPont took on the challenge with zest. One has a hard time imagining a tenor at the right hand of God, no?

All in all, a marvelous concert by fine musicians. Look for them if you haven't seen them yet, they are worth seeing and hearing up close and in person. You can sample their YouTube channel, but make sure and come to a concert where you'll hear what I mean.

This concert was repeated on Sunday, September 10, as part of the Arts at the Abbey series at Belmont Abbey Basilica.