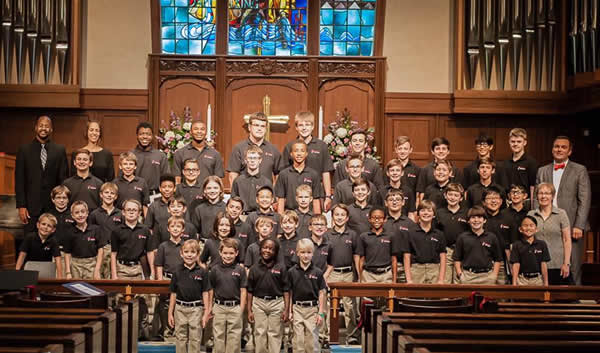 To kick off their much-anticipated and exciting 50th season, the Raleigh Boychoir held a Special 50th Anniversary Concert showcasing choral and solo talents at St. Michael's Episcopal Church. The overall theme of this brand new season is "A Rich History, A Bright Future," which was exemplified by the day's program, spotlighting RBC alumnae as well as past leadership alongside current members. The impact of the concert was profound, and it showed the audience the prominent place that the Boychoir has had (and will continue to have) in the communities of Raleigh and beyond, led by Artistic Director Jeremy Tucker and his musical and administrative teams.

In anticipation of the RBC's more typical fall concert featuring all four choir ensembles that is coming up in less than a month (October 8), this program was more of a celebration of the individual talents that have been and are being fostered by the Boychoir's rich programs. A veritable ensemble of Boychoir alumnae young and old filled the chancel, and past artistic directors were represented through words and music – Robert Unger, who served from 2008-2014, both performed on the organ and conducted the concert's closing piece. Tom Sibley Jr., the son of the Boychoir's founding director, spoke a few words in honor of his father and the place that this organization has had in his life, comparing the organization to having another sibling. Other featured alumni included David Cole, Chris Haire, and Bruce Tippette, who all gave solo performances. (A highlight was Tippette's original song, "How Do I Love Thee," where he performed both vocals and piano.) All of these men began as members and now have music as a full-time career. Kevin Kerstetter, a former conductor and accompanist for the RBC, provided beautiful organ accompaniment for the communal hymns that occurred throughout the concert. Younger alumni were featured, too, such as Andrew Long, who ingeniously played a Bach flute sonata on his saxophone, and Evan Tylka, a talented tenor who wowed the audience with his performance of Stephen Schwartz's "Beautiful City" from the musical Godspell.

Current Boychoir members shone too – first with the Performing Choir in a flawlessly executed opening set of Vivaldi's "Et Exultavit" and Mozart's "Ave Verum Corpus" (paying homage to some of founder Thomas Sibley's most-loved works), then a chilling performance of "Tell My Father" by the Young Men's Ensemble, and ending with "The Lord Bless You and Keep You," sung by choristers young and old. Certainly, these performances gave a glimpse of what to expect for the upcoming season.

Also, any report would be remiss without mentioning the recognition of Vicki Oehling, who gave her last concert with the RBC after an involvement lasting four decades. Oehling has most recently served as the director of the Training Choir, and will be succeeded by Katie O'Neil. Towards the concert's close, she conducted the Resident Choir's performance of "Pie Jesu," accompanied by resident choir director Danny Yancey.

Of course, much more could be written about each individual performance, but it may be best to look ahead at the new season, which raises the bar with performances in venues like the NC American Choral Director's Association Conference, the Duke Chapel, Raleigh's brand new Holy Name of Jesus Cathedral, Meymandi Concert Hall, NC State's Stewart Theatre, and more. Any and all of these performances should not be missed. Watch our calendar for details.