Victorian Rollicking at the Turnage with ECU Opera Theater

The pit orchestra was all students except for the conductor, James Franklin; the opera company was also all students except for the director, John Kramar. The playhouse was the jewel in the crown of Washington's main street, the Turnage Theatre (opened in 1930 as the Palace Theatre). The theatre space was modeled on the Palace Theatre in New York City, but its intimacy is much more effective. Praise to Turnage Executive Director Debra Torrence and ECU's costumier Jeffery Phipps for their efforts in bringing the ECU Opera Theater to Washington. Kramar said from the stage that he believed this to be the first time in fifty years that the company had been on the road.

It can also be said that once one has seen and heard Anna Russell's explanation of a Gilbert and Sullivan opera, one can never forget it, so that might as well be put on the table now: The reason Russell is funny is that she is so accurate. And all that she says is true.

Iolanthe has all the standard G&S characters; in this case a misbehaving fairy Iolanthe, her husband the stuffy Lord Chancellor of England, their Arcadian shepherd son Strephon (half fairy, half mortal), his girlfriend Arcadian shepherdess Phyllis, a guardsman named Willis, the queen of the fairies, the dumbest members of the House of Lords, and a bevy of fairies. This was Victorian England, after all, and Gilbert was very careful to avoid any awkward discussions; Strephon is half fairy and emphatically half mortal, not half man.

There were fourteen fairies, and ten lords a-leaping, and they leapt very well indeed. The fairies were all swathed in luxurious gowns with hoop skirts (and a shocking lack of pantaloons!); the men of the company, with the exception of Strephon and Private Willis, were all dressed in both literal and figurative fustian to represent their pomposity in the House of Lords. But they were able to kick up their heels, including a can-can line. The Turnage stage was full when they were all on; it was a brilliant swirl of effective choreography.

The vocal blue ribbon goes to William Edwards (Strephon), whose rich, strong baritone filled the room. Joseph Morris' (Lord Mountararat) robust bass-baritone blended well with Adam Gross' tenor (Lord Tolloller); the large space of the venue swallowed a lot of Gross' lines, but Gilbert's book is idiotic, so it didn't really matter. Nolawi Araya as Lord High Chancellor had a similar problem, which is a shame, as his delivery of his patter songs was flawless and his voice is excellent. Iolanthe herself was well sung by Alexandra Fee. Christopher Short (Private Willis) has a guardsman's stolidity and, much more importantly, a very fine bass voice. Jennifer Kuchar (Phyllis) was a very believable Arcadian shepherdess. And a very positive "Bless your heart!" to Caroline Miller (Queen of the Fairies) whose delivery of a completely canonically line was as fine as her singing.

There's nothing serious about Gilbert and Sullivan, but the ECU company was seriously good and the evening was delightful. 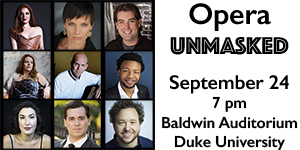