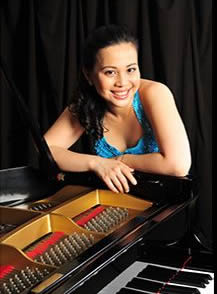 The Duke Symphony Orchestra's concert in Baldwin Auditorium on December 6, 2017, again proved the ensemble's great value among Triangle classical music resources. Although most members are Duke students (with a few community members added in) and despite all the orchestra's concerts being free, audiences never need to lower expectations. Under the authoritative baton of music director Harry Davidson, the DSO delivers highly satisfying performances that make any fleeting blemishes easily dismissed.

Programming is always meaty and this concert was no exception. With 95 players on hand for Wagner and Brahms, plus an experienced soloist for Bach, the presentation was a success in both quantity and quality.

The program opened with Richard Wagner's Overture to The Flying Dutchman, his 1843 opera that first signaled his mold-breaking genius. The overture encapsulates the story's mood and themes, from turbulent seas and ghostly sailors to undying love and ultimate salvation. Davidson immediately established a vigorous, dramatic approach, filling the auditorium with a huge wall of sound. But that was soon supplanted by the delicate redemption melody of Senta's second act ballad and, later, the third act's jolly sailors' chorus, all with the appropriate atmosphere and character.

It was thrilling to hear over 70 strings dig into those exciting passages, particularly the precision of the frenzied, arppeggiated run-up to the finale. However, from the work's first notes, the large brass section overpowered, especially with the recently renovated auditorium's bright acoustics, and the section was rather unsettled throughout the piece. Nevertheless, the overall performance indicated Davidson and the orchestra's understanding of the work's larger-than-life nature.

In the Adagio second movement, Yudha was freer to shape the music, giving the lovely wafting melody a melancholy glow, enhanced by Davidson's hushed direction. Here, Yudha's playing was more crystalline than in the weightier other movements. For Yudha's untiring confidence and control throughout the concerto, the grateful audience cheered and applauded enthusiastically.

After intermission, Davidson and the full complement of players returned for Brahms' Symphony No. 1, the work that confirmed the composer's stature as a symphonist, many seeing him as the logical successor to Beethoven. As Davidson mentioned in remarks before conducting the piece, there are similarities to Beethoven's structure and themes in the Brahms' first, but these are homages not imitations.

Here Davidson was in his element, fully familiar with every twist and turn in the score but also aware of the overriding arc in each movement and the warm, enveloping richness that is a Brahms hallmark. It took only a few minutes of the first movement's yearning theme, unfolding in great surging waves, to recognize this was going to be an enthralling performance.

The strings had exactly the right weight and tension throughout, impressive in several extended pizzicato passages and stirring in the massed sections of the first and fourth movements. Among the featured players, several deserve special mention. Timpanist Eric Chang's contributions in the two outer movements were star soloist level, providing lessons in the way timpani can add subtle or dramatic mood. In the Andante second movement, principal oboist Delia Li spun the introspective melodies with plangent character and concertmaster Carolyn Chang floated the solo violin lines with somber grace.

Requiring four horns to play exposed, crucial passages is a challenge for any orchestra. Here, they were often loud, rough, and troubled by blats. Thankfully, they also were able to be mellow, especially in the latter part of the fourth movement. All was forgiven once the sweeping anthem took over, guiding the movement towards its glorious finale. One could feel the audience leaning in, drawn inexorably into the uplift of those climatic last minutes.

It's easy to tell the difference between an obligatory standing ovation and a genuine one. The latter greeted Davidson and the orchestra after the last note echoed. Unadulterated love and admiration radiated from the audience for such an exhilarating performance.