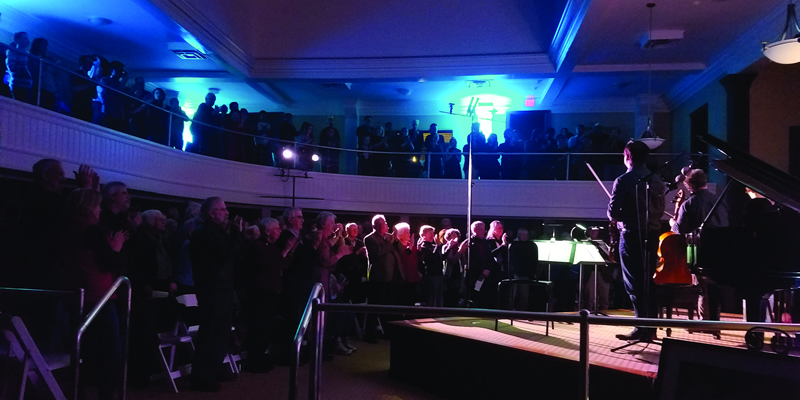 Olivier Messiaen's monumental Quartet for the End of Time (Quatour pour la fin du temps) certainly needs no introduction, but it is a work that perhaps mystifies the average listener. For the second performance in the Chamber Music Dressed Down series, the Four Seasons Chamber Music Festival produced a performance that bridged the gap between performer and audience. The physical "gap" was lessened by the intimate setting of All Saints Chapel in downtown Raleigh, and all other gaps (mental, emotional, spiritual) were eliminated with an explanation of the quartet's fascinating impetus and a post-concert discussion where the four musicians shared their experience performing this music. The musicians who brought Messaien's music to life were the festival's artistic director and violinist Ara Gregorian, clarinetist Alan Kay, cellist Michael Kannen, and pianist Sahun Sam Hong.

The instrument setting of this quartet has been seldom duplicated by other composers, and actually arose from sheer chance when Messaien, a pianist, befriended three other musicians (a violinist, cellist, and clarinetist) while imprisoned as prisoners of war in Gorlitz, Germany in 1940. Given the physical setting of the work's creation, and its inspiration from the Bible's Book of Revelation, many might assume the music would be desolate and dark; instead, it is a work of hope, and an attempt to be released from the "tyranny of time" to connect with the infinite and eternal. All of this was illuminated marvelously by Kannen to precede the performance.

If this quartet's historical background provided context and depth to the performance, the four performers of the present brought a combination of profound focus and emotion to create Messiaen's ethereal "sound world." This resulted in an absolutely moving performance that brought a new understanding to one of the most important musical works of the 20th century. The atmospheric and seemingly meterless first movement, "Crystal Liturgy," features clarinet and violin as awakening birds (as Messiaen himself described). In the second movement, the quartet shifted moods effortlessly when a cloudy, ethereal melody is sandwiched between arresting, violent chords and an almost sawing motion in the strings, portraying the terrifying power of the "Angel Who Announces the End of Time."

The third movement, "Abyss of the Birds," explores the juxtaposition between the confinement of Time and the swirling freedom of birds in a completely solo movement for clarinet. Kay's emphatic, capricious bird-calls rang resonantly in the chapel's space; long crescendos, seemingly from nothing, were riveting. Following a surprisingly tonal, expertly matched unison melody in the Interlude, Kannen's solo cello appears. In this serene, profound movement, he was accompanied by Hong on the piano, and as the atmospheric texture blossomed, so did the duet's expression.

The unique timbre of these four instruments together shone in the accented, strictly unison melody of the "Dance of the Fury, for the Seven Trumpets." In later moments where polyphony reigned, the musicians' expression was still mirrored with alternating (and terrifying) tremolos and breathless, rapid scale figures. The angel of movement two appears again in the seventh, where Messaien said it best: "...I pass into unreality and lose myself in a rapture to a whirling, gyrating fusion of superhuman sound and color." Hong's legato arpeggios accomplished the "whirling" sensation, while stern spiccato in the strings created the Angel's swords of fire. The journey upward is finally accomplished in the transcendent final movement, led by Gregorian ascending to impossible heights. After the final note died away, a long moment of silence fell, where both performers and audience members were transfixed by the power of the music.

This program repeats 3/16 in Greenville. See our sidebar for details.