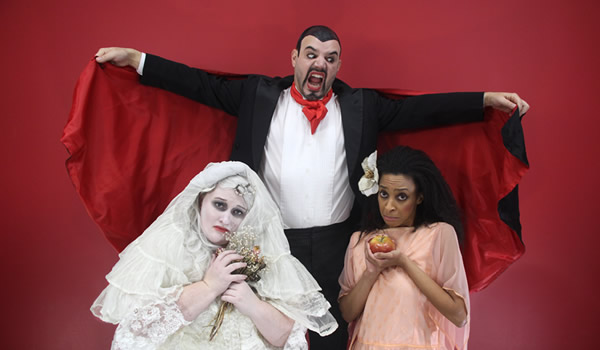 The Durham Savoyards are known for loyally representing Gilbert and Sullivan's collection of librettos in their original, true form, while maintaining a sense of relevancy, and always a sense of humor. This current production of Ruddigore (or The Witches' Curse) is no different ­– and how fitting that it falls on a weekend with the spooky and "unlucky" date of Friday the 13th. Director Derrick Ivey and music director Jackson Cooper stayed mostly true to the original music and libretto (with, of course, just a few comic ad libs), leading a very well rounded cast of characters, bridesmaids, and gentry. You could probably call the gentry something else entirely…but this is a spoiler-free review.

Sometimes performances of Gilbert and Sullivan will skip the orchestral Overture at the beginning of each show, but the Durham Savoyards took this opportunity to create hilarious pantomime scenes, which both served to illustrate the overture's music and introduce the strong personalities of the characters. One thing about this show's ensemble that was apparent from the very beginning was that each and every bridesmaid and gentry, despite not being named specifically, had an apparent personality. It was obvious that all ensemble members had created unique personae for themselves, which translated to the audience very effectively.

The ensemble's attention to detail is just one aspect of the Durham Savoyard's Ruddigore where no detail was left untouched. Clever spotlighting, effective costuming, effortless cues between singers and orchestra (the Savoyards' own Durham Savoy Opera Orchestra), and especially the marvelous portraits by Vanessa Mills were all detailed to the highest degree. In fact, the reveal of the latter at the top of the second act was one of the highlights of the show – made even more memorable when the painted faces were replaced by their human counterparts.

Now, on to the characters – Jenne Carey's performance as Rose Maybud was the perfect balance of wide-eyed naiveté and humor, as she navigated through each ridiculous romantic pairing, consulting her beloved book of etiquette along the way. Her eventual but hotly-contested romance with Robin Oakapple (aka Sir Ruthven Murgatroyd) was hilarious to follow. Greg Toft was wonderful in these roles, especially when attempting to become a "bad bart" after behaving as a simple farmer all those years. Michael Rowe's appearance in the second act as Roderic Murgatroyd (Ruthven's uncle and the long-lost lover of Dame Hannah) was also notable. Michael Laporte's performance as Richard "Dick" Dauntless was always hilarious, but there was something unusual about his character…however, no spoilers.

The dramatic and musical consistency throughout the cast really made this show come to life – the ensemble chorus together was very well-tuned, particularly in each act's finale. The separate men's and women's ensembles were powerful as well. This musical strength, combined with well-rehearsed (yet natural) comedic timing and all the other details discussed above, made for a wonderful performance of Ruddigore.

This performance repeats Saturday, April 14 and Sunday, April 15. See our sidebar for details.