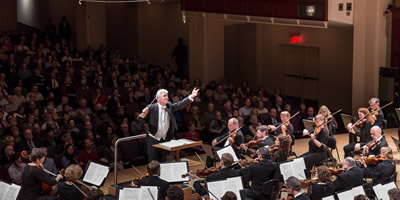 The conclusion of the North Carolina Symphony's regular 2017-18 season, titled "A Hero's Life," was a fitting end to another great season. Consisting of just two monumental works by Arnold Schönberg and Richard Strauss, the program showcased the Symphony's ability to dazzle with technical prowess while keeping the highest level of emotional sensitivity. With Grant Llewellyn at the helm, this seemed effortless.

The program's title comes from the nickname of Strauss' Ein Heldenleben, but the pre-intermission selection of Schönberg's Verklärte Nacht (Transfigured Night) for string orchestra was just as compelling. It is worth noting, that the two works were composed and premiered only years apart, since these two composers were contemporaries of one another. Verklärte Nacht was originally composed as chamber music for a string sextet; NCS of course played the orchestral revision of 1943. However, having been composed first in 1899, the work does not bear the atonal serialism that characterizes Schönberg's later works. It is mostly tonal, yet pushes the limits through chromaticism and unpredictable cadences. A baton-less Llewellyn led with appropriately smooth gestures, personifying the undulating texture of the strings; these were the ripples of moonlight described in Dehmel's poem of the same title, which this work brings to life. Fantastic recurring solos from the first viola illustrated the gentle dialogue between a man and woman in the story. Several impossibly high but well-tuned violin chords led their way to the peaceful closing, sounding just like ethereal vibrations of "singing" glass.

While Schönberg's work was a little programmatic, the tone poem Ein Heldenleben consists of six clearly named "chapters." Although the hero is unnamed, aspects of the work are considered to be autobiographical. Part of what makes this work so special is its showcasing of all sections of the orchestra in the best way possible. There are clearly defined characters that run throughout all sections: the hero, of course, is an agile brass-led theme; the hero's critics are quibbling, leaping woodwinds; and the hero's companion/lover is represented by a capricious, unpredictable single violin. NCS concertmaster Brian Reagin brought this latter character to life magnificently. His cadenzas in section three ("The Courtship") seemed effortless and natural – no easy feat with such demanding and ever-changing passages – which Strauss wrote to portray his multi-faceted wife.

Repeated trumpet fanfare in the latter three sections depict conflict and war, but are soon quickly overcome by the hero's theme on the battlefield. This march is intense and unrelenting, yet marked with poignant pauses where just enough time is given to let the sound die away. The work ends with an unlikely duet between concertmaster and first horn, leading to a content, peaceful cadence from the brass and woodwinds, signifying that all is well within the hero.

Although this concert concludes the Symphony's regular season, stay tuned for the Summerfest Series, opening on May 26.

This performance repeats Saturday, May 19. See our sidebar for details.