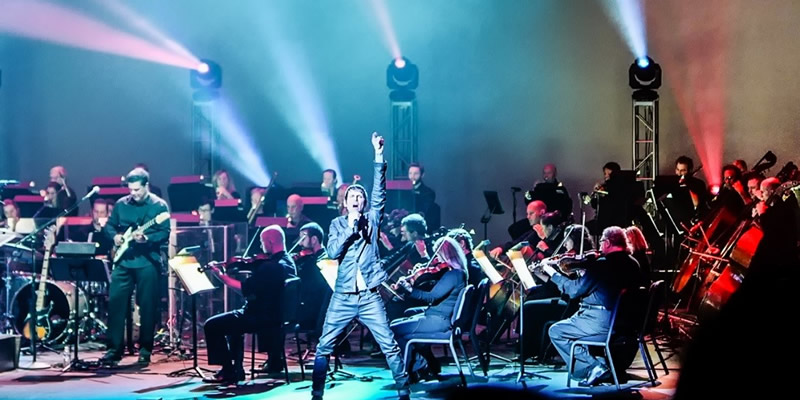 The Koka Booth Amphitheatre in Cary welcomed a sold-out audience for the North Carolina Symphony's latest Summerfest production, "The Music of Tom Petty," where orchestra members were joined in the tribute by vocalist Tony Vincent and a full rock band. Keeping it all together was conductor Richard Carsey, who is currently the conductor for Phantom of the Opera on Broadway. The NCS itself is no stranger to tribute concerts – Carsey will return in just a few months for "The Music of Queen," on September 15, and Tony Vincent was featured in the 2017 Summerfest season with "The Music of U2."

The lawn of the amphitheatre was filled to the brim, thanks to a combination of fantastic music and surprisingly perfect weather for mid-July in North Carolina. The concert began with "Jammin' Me," wherein pulsing strings filled out the background easily. With "Mary Jane's Last Dance," the orchestra flourished with a more active chord progression and with the addition of backup singers. It was obvious from the start that Carsey had a good handle on keeping the groove while still maintaining a sense of flexibility for the rock genre. Vincent did a great job of weaving his own personal vocal style with Tom Petty's music, making his performance feel like an organic tribute, rather than an impersonation.

Adding to the authenticity, Tony Vincent often took a moment between songs to talk about what he was about to perform, sometimes sharing facts about a song or even personal connections and anecdotes. For instance, he emphasized the influence of British rock music, namely the Beatles, on both himself and Tom Petty. Through this, it was obvious that Vincent has a personal passion for this music too.

Several solo instruments had the spotlight as well; in "Yer So Bad" and others, keyboard riffs could be heard, and fantastic guitar solos took the spotlight in "Learning to Fly," "Won't Back Down," and others. Even the audience got involved. In addition to simply clapping in a few songs, Vincent invited the audience to sing call-and-response style for the song "Breakdown." At this point in the second half of the concert, the area just in front of the stage was filled with audience members dancing and clapping along. To close the concert, the orchestra played several beloved numbers ‒first, a lush rendition of "Free Fallin'" featuring lovely brass, then "Don't Come Around Here No More," and finally, "American Girl." This last song sadly turned out to be the final song that Tom Petty and the Heartbreakers ever performed live before his untimely death only a week after concluding his 40th anniversary tour in fall 2017. Despite this, the mood in the amphitheatre at the end of the concert was decidedly more celebratory than somber, thanks to the infectious and authentic energy of Vincent, Carsey, and the NC Symphony.

Summerfest continues through July 21. For details, see our calendar.